Through the Eye of a Needle

(1 review)
PUBLISHED: 29th April 2014
ISBN: 9780691161778
ANNOTATION:
Jesus taught his followers that it is easier for a camel to go through the eye of a needle than for a rich man to enter heaven. This book offers a sweeping intellectual and social history of the vexing problem of wealth in Christianity in the waning days of the Roman Empire. 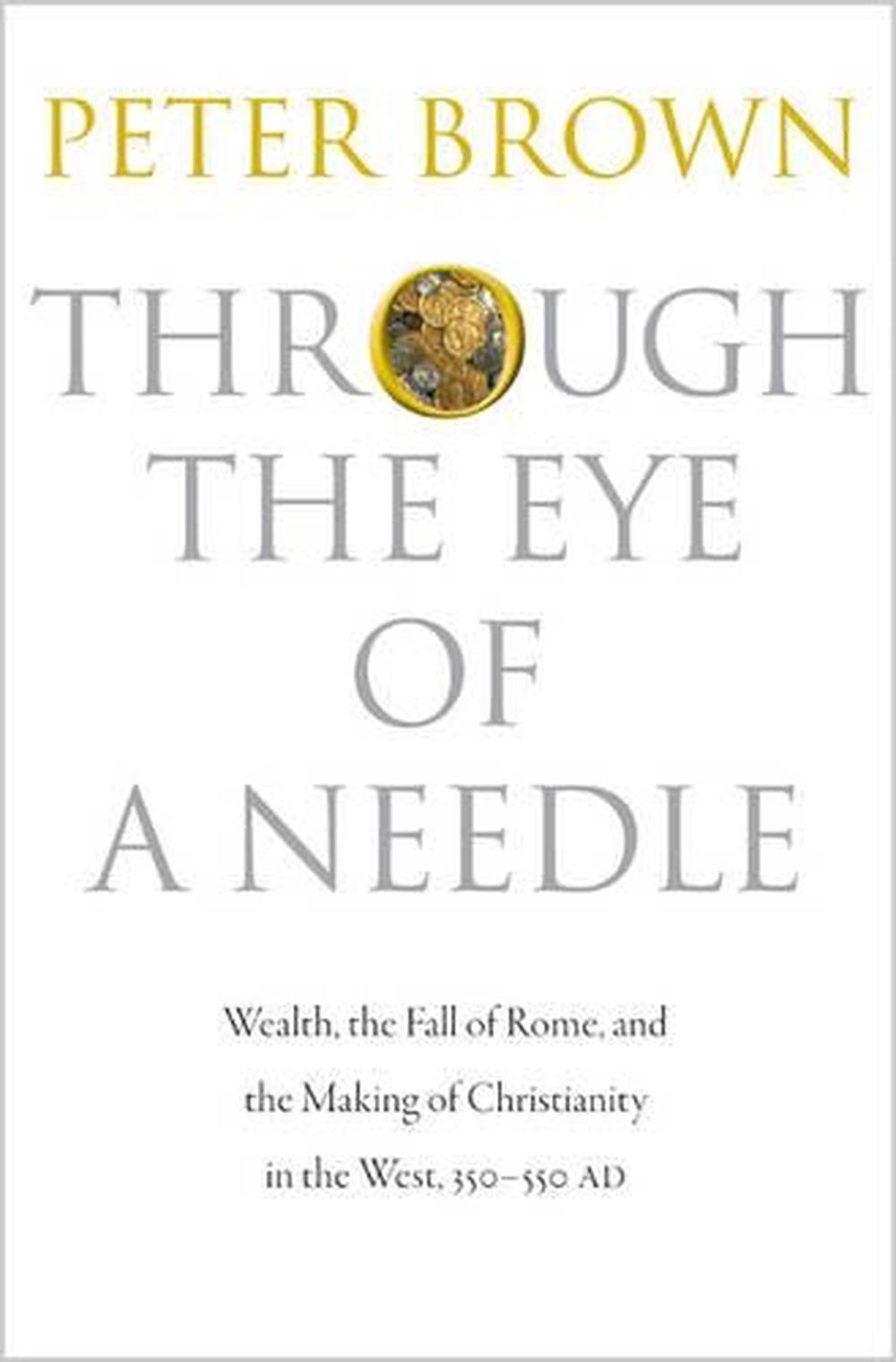 OTHER FORMATS:
PUBLISHED: 29th April 2014
ISBN: 9780691161778
ANNOTATION:
Jesus taught his followers that it is easier for a camel to go through the eye of a needle than for a rich man to enter heaven. This book offers a sweeping intellectual and social history of the vexing problem of wealth in Christianity in the waning days of the Roman Empire.

Jesus taught his followers that it is easier for a camel to go through the eye of a needle than for a rich man to enter heaven. This book offers a sweeping intellectual and social history of the vexing problem of wealth in Christianity in the waning days of the Roman Empire.

Jesus taught his followers that it is easier for a camel to go through the eye of a needle than for a rich man to enter heaven. Yet by the fall of Rome, the church was becoming rich beyond measure. Through the Eye of a Needle is a sweeping intellectual and social history of the vexing problem of wealth in Christianity in the waning days of the Roman Empire, written by the world's foremost scholar of late antiquity. Peter Brown examines the rise of the church through the lens of money and the challenges it posed to an institution that espoused the virtue of poverty and called avarice the root of all evil. Drawing on the writings of major Christian thinkers such as Augustine, Ambrose, and Jerome, Brown examines the controversies and changing attitudes toward money caused by the influx of new wealth into church coffers, and describes the spectacular acts of divestment by rich donors and their growing influence in an empire beset with crisis. He shows how the use of wealth for the care of the poor competed with older forms of philanthropy deeply rooted in the Roman world, and sheds light on the ordinary people who gave away their money in hopes of treasure in heaven. Through the Eye of a Needle challenges the widely held notion that Christianity's growing wealth sapped Rome of its ability to resist the barbarian invasions, and offers a fresh perspective on the social history of the church in late antiquity.

" Through the Eye of a Needle is a masterpiece of detailed historiography, brilliantly written. Peter Brown's long-awaited book surpasses even the high expectations set by his previous writings, and will engage general readers and specialists alike." --Elaine Pagels, author of Revelations: Visions, Prophecy, and Politics in the Book of Revelation "Here Peter Brown listens to the heartbeat of the late Roman world. His report is a masterpiece that introduces us to the wealth and poverty of an empire as it implodes, and the inspiring Christian concept of treasure in heaven. Excavating the roots of medieval charity, he illuminates the problems of rich and poor today, and delivers a triumph of history at its finest." --Judith Herrin, author of Byzantium: The Surprising Life of a Medieval Empire "The gap between rich and poor is one of the major issues of today, and who better than Peter Brown to probe the acute problems of conscience it presented to late antique Christians? In this important book, he brings to this vital subject his characteristic wit, wisdom, and humanity, as well as the mature reflection of a great historian. It is a magnificent achievement." --Averil Cameron, author of The Mediterranean World in Late Antiquity: AD 395-700 "Like a master mosaicist, Brown brings together a huge assemblage of sources to produce a vibrant panorama bursting with vitality. His story of the transfer of great wealth from rich individuals and families to the coffers of the church is the story of the creation of the postimperial West and the European Middle Ages. This is a big, and big-hearted, beautiful book. Tolle, lege. " --Paula Fredriksen, author of Sin: The Early History of an Idea "This is a book that only Peter Brown could write. It has his trademark stamped all over it, in the richness of its source material, its breadth of coverage and turn of phrase, its fondness for the middling folk and outsiders who usually fall by the wayside of academic scholarship, and its insistence on seeing pagans and Christians as part of a larger, shared world." --H. A. Drake, author of Constantine and the Bishops "Peter Brown has written a book for the ages, one that every specialist throughout the world in late antique history and the history of Christianity will read. Through the Eye of a Needle is a remarkable work of scholarship--interesting, informative, original, and stimulating. I recommend it warmly and confidently." --Thomas F. X. Noble, author of Images, Iconoclasm, and the Carolingians

Peter Brown is the Philip and Beulah Rollins Professor of History Emeritus at Princeton University. His many books include "The World of Late Antiquity", "The Rise of Western Christendom", and "Augustine of Hippo".

List of Maps xv List of Illustrations xvii Preface xix Part I Wealth, Christianity, and Giving at the End of an Ancient World 1 Chapter 1 Aurea aetas - Wealth in an Age of Gold 3 Chapter 2 Mediocritas - The Social Profile of the Latin Church, 312-ca. 370 31 Chapter 3 Amor civicus - Love of the city - Wealth and Its Uses in an Ancient World 53 Chapter 4 "Treasure in Heaven" - Wealth in the Christian Church 72 Part II An Age of Affluence 91 Chapter 5 Symmachus - Being Noble in Fourth-Century Rome 93 Chapter 6 Avidus civicae gratiae - Greedy for the good favor of the city - Symmachus and the People of Rome 110 Chapter 7 Ambrose and His People 120 Chapter 8 "Avarice, the Root of All Evil" - Ambrose and Northern Italy 135 Chapter 9 Augustine - Spes saeculi - Careerism, Patronage and Religious Bonding, 354-384 148 Chapter 10 From Milan to Hippo - Augustine and the Making of a Religious Community, 384-396 161 Chapter 11 "The Life in Common of a kind of Divine and Heavenly Republic" - Augustine on Public and Private in a Monastic Community 173 Chapter 12 Ista vero saecularia - Those things, indeed, of the world - Ausonius, Villas, and the Language of Wealth 185 Chapter 13 Ex opulentissimo divite - From being rich as rich can be Paulinus of Nola and the Renunciation of Wealth, 389-395 208 Chapter 14 Commercium spiritale The spiritual Exchange - Paulinus of Nola and the Poetry of Wealth, 395-408 224 Chapter 15 Propter magnificentiam urbis Romae - By reason of the magnificence of the city of Rome - The Roman Rich and their Clergy, from Constantine to Damasus, 312-384 241 Chapter 16 "To Sing the Lord's Song in a Strange Land" - Jerome in Rome, 382-385 259 Chapter 17 Between Rome and Jerusalem - Women, Patronage, and Learning, 385-412 273 Part III An Age of Crisis 289 Chapter 18 "The Eye of a Needle" and "The Treasure of the Soul" - Renunciation, Nobility, and the Sack of Rome, 405-413 291 Chapter 19 Tolle divitem - Take away the rich - The Pelagian Criticism of Wealth 308 Chapter 20 Augustine's Africa - People and Church 322 Chapter 21 "Dialogues with the Crowd" - The Rich, the People, and the City in the Sermons of Augustine 339 Chapter 22 Dimitte nobis debita nostra - Forgive us our sins - Augustine, Wealth, and Pelagianism, 411-417 359 Chapter 23 "Out of Africa" - Wealth, Power and the Churches, 415-430 369 Chapter 24 "Still at that Time a More Affluent Empire" - The Crisis of the West in the Fifth Century 385 Part IV Aftermaths 409 Chapter 25 Among the Saints - Marseilles, Arles and Lerins, 400-440 411 Chapter 26 Romana respublica vel iam mortua - With the empire now dead and gone - Salvian and His Gaul, 420-450 433 Chapter 27 Ob Italiae securitatem - For the security of Italy - Rome and Italy, ca. 430-ca. 530 454 Part V Toward Another World 479 Chapter 28 Patrimonia pauperum - Patrimonies of the poor - Wealth and Conflict in the Churches of the Sixth Century 481 Chapter 29 Servator fidei, patriaeque semper amator - Guardian of the Faith, and always lover of [his] homeland - Wealth and Piety in the Sixth Century 503 Conclusion 527 Abbreviations 531 Notes 533 Works Cited Primary Sources 641 * Secondary Sources 654 Index 719