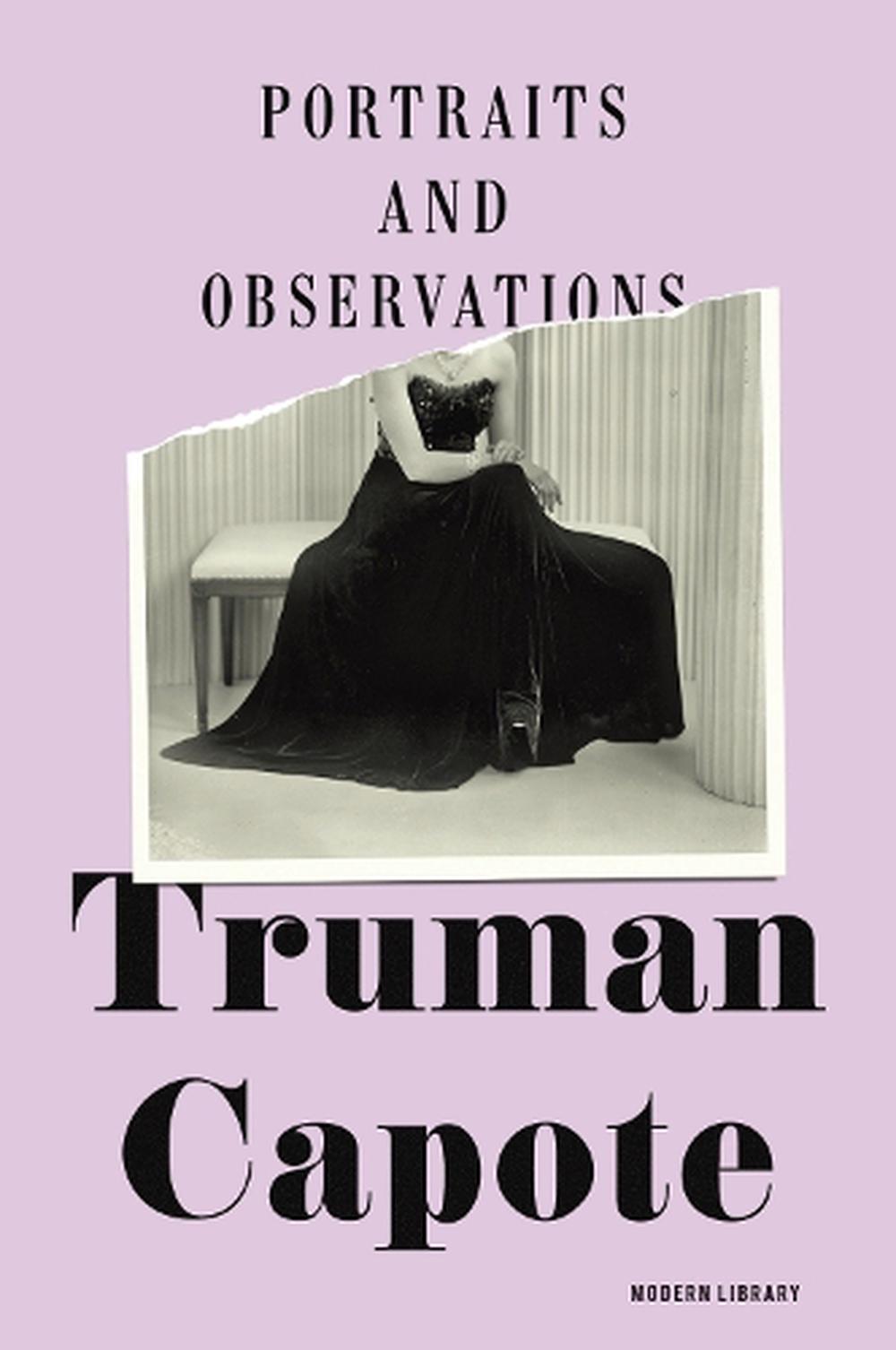 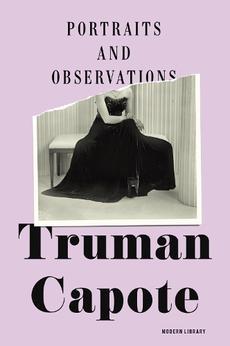 Perhaps no twentieth-century writer was so observant and graceful a chronicler of his times as Truman Capote. Portraits and Observations is the first volume devoted solely to all the essays ever published by this most beloved of writers. Included are such masterpieces of narrative nonfiction as "The Muses Are Heard" and the short nonfiction novel "Handcarved Coffins," as well as many long-out-of-print essays, including portraits of Mae West, Humphrey Bogart, and Marilyn Monroe. From his travel sketches of Brooklyn, New Orleans, and Hollywood, written when he was twenty-two, to the author's last written words, "Remembering Willa Cather," composed the day before his death in 1984, Portraits and Observations puts on display the full spectrum of Truman Capote's brilliance. Certainly Capote was, as Somerset Maugham famously called him, "a stylist of the first quality." But as the pieces gathered here remind us, he was also an artist of remarkable substance.

Truman Capote was born in New Orleans on September 30, 1924. He rose to international prominence in 1948 with the publication of his debut novel, "Other Voices," "Other Rooms," His other works of fiction include "Breakfast at Tiffany's," "A Tree of Night," "The Grass Harp," and "Summer Crossing," the author's long-lost first novel, which was rediscovered in 2004 and published by Random House in 2005. His nonfiction novel "In Cold Blood" is widely considered one of the greatest books of the twentieth century. Capote twice won the O. Henry Memorial Short Story Prize and was a member of the Natio

"A must-have treasure for Capote fans . . . These are delicious, dramatic, and tender nonfiction portraits and tales."--NPR's Morning Edition "A wonderful volume . . . Nearly every page can be read with real pleasure. . . . No matter what his subject, [Capote's] canny, careful art gives it warm and breathing life"--The Washington Post Book World

"Every piece is a treasure. . . . Pages and pages of remarkably evocative, careful and well-observed prose [delineate, ] in a measured and elegant manner, one of the most remarkable American literary lives of the twentieth century."--Jane Smiley, Los Angeles Times Book Review

Chapter 1 NEW ORLEANS (1946) In the courtyard there was an angel of black stone, and its angel head rose above giant elephant leaves; the stark glass angel eyes, bright as the bleached blue of sailor eyes, stared upward. One observed the angel from an intricate green balcony--mine, this balcony, for I lived beyond in three old white rooms, rooms with elaborate wedding-cake ceilings, wide sliding doors, tall French windows. On warm evenings, with these windows open, conversation was pleasant there, tuneful, for wind rustled the interior like fan-breeze made by ancient ladies. And on such warm evenings the town is quiet. Only voices: family talk weaving on an ivy-curtained porch; a barefoot woman humming as she rocks a sidewalk chair, lulling to sleep a baby she nurses quite publicly; the complaining foreign tongue of an irritated lady who, sitting on her balcony, plucks a fryer, the loosened feathers floating from her hands, slipping into air, sliding lazily downward. One morning--it was December, I think, a cold Sunday with a sad gray sun--I went up through the Quarter to the old market, where at that time of year there are exquisite winter fruits, sweet satsumas, twenty cents a dozen, and winter flowers, Christmas poinsettia and snow japonica. New Orleans streets have long, lonesome perspectives; in empty hours their atmosphere is like Chirico, and things innocent, ordinarily (a face behind the slanted light of shutters, nuns moving in the distance, a fat dark arm lolling lopsidedly out some window, a lonely black boy squatting in an alley, blowing soap bubbles and watching sadly as they rise to burst), acquire qualities of violence. Now, on that morning, I stopped still in the middle of a block, for I''d caught out of the corner of my eye a tunnel-passage, an overgrown courtyard. A crazy-looking white hound stood stiffly in the green fern light shining at the tunnel''s end, and compulsively I went toward it. Inside there was a fountain; water spilled delicately from a monkey-statue''s bronze mouth and made on pool pebbles desolate bell-like sounds. He was hanging from a willow, a bandit-faced man with kinky platinum hair; he hung so limply, like the willow itself. There was terror in that silent suffocated garden. Closed windows looked on blindly; snail tracks glittered silver on elephant ears, nothing moved except his shadow. It swung a little, back and forth, yet there was no wind. A rhinestone ring he wore winked in the sun, and on his arm was tattooed a name, "Francy." The hound lowered its head to drink in the fountain, and I ran. Francy--was it for her he''d killed himself? I do not know. N.O. is a secret place. My rock angel''s glass eyes were like sundials, for they told, by the amount of light focused on them, time: white at noon, they grew gradually dimmer, dark at dusk, black--nightfall eyes in a nightfall head. The torn lips of golden-haired girls leer luridly on faded leaning house fronts: Drink Dr. Nutt, Dr. Pepper, Nehi, Grapeade, 7-Up, Koke, Coca-Cola. N.O., like every Southern town, is a city of soft-drink signs; the streets of forlorn neighborhoods are paved with Coca-Cola caps, and after rain, they glint in the dust like lost dimes. Posters peel away, lie mangled until storm wind blows them along the street, like desert sage--and there are those who think them beautiful; there are those who paper their walls with Dr. Nutt and Dr. Pepper, with Coca-Cola beauties who, smiling above tenement beds, are night guardians and saints of the morning. Signs everywhere, chalked, printed, painted: Madame Ortega--Readings, Love-potions, Magic Literature, C Me; If You Haven''t Anything To Do . . . Don''t Do It Here; Are You Ready To Meet Your Maker?; B Ware, Bad Dog; Pity The Poor Little Orphans; I Am A Deaf & Dumb Widow With 2 Mouths To Feed; Attention; Blue Wing Singers At Our Church Tonight (signed) The Reverend. There was once this notice on a door in the Irish Channel district, "Come In And See Where Jesus Stood." "And so?" said a woman who answered when I rang the bell. "I''d like to see where Jesus stood," I told her, and for a moment she looked blank; her face, cut in razorlike lines, was marshmallow-white; she had no eyebrows, no lashes, and she wore a calico kimono. "You too little, honey," she said, a jerky laugh bouncing her breasts, "you too damn little for to see where Jesus stood." In my neighborhood there was a certain caf