From Crook to Cook 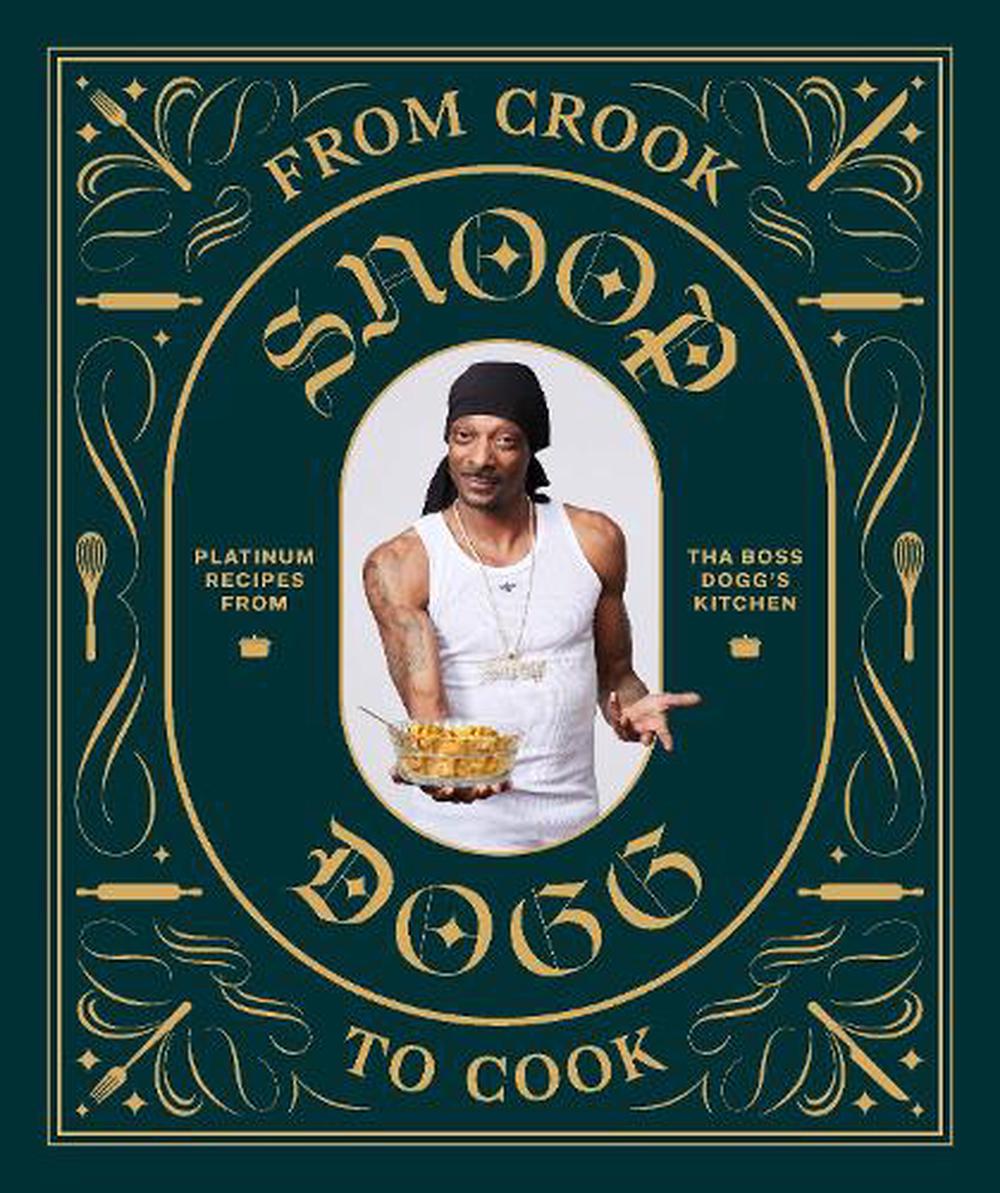 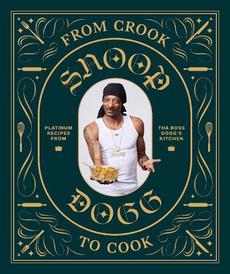 PUBLISHED: 23rd October 2018
ISBN: 9781452179612
ANNOTATION:
"You know it's blazin' up in my kitchen. I'm takin' the cookbook game higher with a dipped and whipped collection of my favorite recipes, ya dig?"-Snoop Dogg
Product Unavailable

From Crook to Cook

OTHER FORMATS:
PUBLISHED: 23rd October 2018
ISBN: 9781452179612
ANNOTATION:
"You know it's blazin' up in my kitchen. I'm takin' the cookbook game higher with a dipped and whipped collection of my favorite recipes, ya dig?"-Snoop Dogg

"You know it's blazin' up in my kitchen. I'm takin' the cookbook game higher with a dipped and whipped collection of my favorite recipes, ya dig?"-Snoop Dogg

Delivering 50 recipes straight from his own collection, Snoop's cookbook features OG staples like Baked Mac & Cheese and Fried Bologna Sandwiches with Chips, and new takes on classic weeknight faves like Soft Flour Tacos and Easy Orange Chicken. And it don't stop...Snoop's giving a taste of the high life with remixes on upper echelon fare such as Lobster Thermidor and Filet Mignon. But we gotta keep it G with those favorite munchies too, ya know? From chewy Starbursts to those glorious Frito BBQ Twists, you should have an arsenal of snacks that'll satisfy. And of course, no party is complete without that Gin and Juice and other platinum ways to entertain.

The Doggfather's got you covered - complete with epic stories and behind-the-scenes photos that brings this masterpiece to life.

Is there anyone more iconic and beloved than Snoop Dogg? From music to movies to TV, Snoop Dogg has been an integral part of our mainstream media for 20+ years, and there are millions of diehard Snoop fans. His Emmy nominated TV show, Martha & Snoop's Potluck Dinner Party, centers on entertaining and cooking. Not only is Snoop keeping busy with his show, he just released a new gospel album (Bible of Love), started a cannabis lifestyle company (Merry Jane), and is soon to be a bestselling cookbook author! Also being celebrated this year: the unveiling of Snoop's star on the Hollywood Walk of Fame; the 25th anniversary of his debut album, Doggystyle; plus more episodes of Martha & Snoop's Potluck Dinner Party. The half hour cooking show features the hosts preparing their own dishes with celebrity guests who have included Queen Latifah. Seth Rogan, Ice Cube, 50 Cent, Kathy Griffin, Usher, and many more. The show is available via online streaming on VH1 and can be accessed internationally in Asia, Canada, Australia, and the UK.

"If the upcoming release of Snoop Dogg's new cookbook doesn't get you excited, then we don't know what will. From running to be an X Factor judge to co-hosting a cooking show with Martha Stewart, the 46-year-old rapper is always full of surprises. Now, the Doggfather is making his contribution to the rap cookbook genre with his new 'From Crook to Cook' book, featuring 50 of his all-time favourite recipes including lobster, chicken and 'snacks to satisfy those munchies'." -- Evening Standard "When Snoop Dogg emerged from Long Beach, California as Dr Dre's prodigy in 1992, spitting out versus to Who Am I? (What's My Name) and cementing himself as a pioneer of West Coast rap, no one in the universe expected we'd be taking his culinary advice a couple of decades later.

But it's happened. Calvin Cordozar Broadus, Jr. is making his debut into the cookbook world with From Crook to Cook: Platinum Recipes from Tha Boss Dogg's Kitchen. The book features 50 recipes which are apparently from Snoop's personal collection, although this won't come as a surprise to anyone who has been paying attention to the rapper's recent movements.

The 46-year-old has slowly established himself as one half of a very unlikely double act with Martha Stewart - AKA the American Delia Smith. Their show Potluck Dinner Party was even nominated for an Emmy and as a good friend of the star, Stewart even wrote the foreword in From Crook to Cook." -- Esquire.com "The Last Meal wasn't Snoop Dogg's last meal at all. Nearly 20 years after the rapper released his fifth studio album, he's gone and written a cookbook: From Crook to Cook, published 23 October. 'From Cook to Crook, Platinum recipes from tha boss Dogg's kitchen' has been eagerly awaited since it was announced earlier this year." -- inews.co.uk "Snoop Dogg is the lifestyle guru we need right now" -- The Quartz "[Martha] Stewart says Snoop has "surprised" her along the way with his unique cooking. He certainly has a unique way with words. "You know it's blazin' up in my kitchen," says Snoop, adding in his introduction: "Like a real seasoned playa, my tastes have evolved over the years. But while I've learned how to get down with that top-notch luxury cuisine, I'm still prone to keep it way hood with some of those LBC [Long Beach, California] classics...Trust your big homie. This is the best cookbook ever made." It's a big claim for a book which features an entire spread about which cereals are best to eat when you're high (Lucky Charms and Honey Nut Cheerios, in case you are wondering). There are, however, some pretty good recipes: Snoop's favourite fried chicken and waffles, apple pie, tacos, mac and cheese, "billionaire's bacon," even lobster thermidor. A section dedicated to cocktails contains the original recipe for, what else, gin and juice, inspired by Snoop Dogg's 1993 song of the same name." -- i newspaper "The rapper Snoop Dogg has a domestic side. First came his TV show with Martha Stewart, now he's written a cookbook." -- The Times Weekend "Granted, Snoop Dog might not be the first person you think of when it comes to baking, but his new cookbook, 'From Crook to Cook', might well leave you surprised!" -- Food Heaven "Snoop Dogg just ventured into the cookbook world with From Crook to Cook: Platinum Recipes From Tha Boss Dogg's Kitchen and we're here for it - gin and juice and all." -- Popsugar "Now that he is on a show with Martha Stewart, it was only natural for the Doggfather to drop his own cookbook, which includes easy food recipes and his own unique take on gin and juice." -- Bravo TV "He has also released his first cookbook 'From Crook to Cook'. 'Platinum recipes from the boss doggs kitchen... the first ever snoop cook book comin soon to @ChronicleBooks,' the 17-time Grammy nominated rapper shared on Instagram and Twitter. The cookbook will feature 50 of Snoop's favorite recipes that includes things like baked mac and cheese, chicken and waffles, soft flour tacos, easy orange chicken and baby back ribs." -- MailOnline "It has pride of place on my cookbook shelf - and not just for the novelty value." -- Harriet Addison, The Times "Complete the Snoop superfan's kitchen with this delicious and hilarious cooking companion. With Snoop's favorite recipes, go-to snacks, pantry essentials, and stories from the star's kitchen, this has everything you need to cook like the Top Dogg." -- Apartment Therapy "None of the recipes required special skills or cooking techniques, and all of them could be perfected without much practice. Which is more that I can say than a lot of other recipes out there these days. Also, I'm all for cookbooks that help people make tasty, homemade versions of their favorite restaurant comfort foods so this gets my stamp of approval!" -- Michelle No, Buzzfeed "World renowned recording artist Snoop Dogg has published his first cookbook, following the success of his food television show with Martha Stewart. The recipes are full of the rapper's take on everything from mac and cheese to filet mignon." -- BookRiot "We all knew Snoop Dogg could rap, and now we know he can cook, too." -- The Week "From the moment we heard Snoop had put together his own cookbook, we had to get our hands on a copy. Twenty-five years on from his now iconic debut album Doggystyle, we find ourselves perusing a collection of his favourite recipes rather than songs. From Cook to Crook is a genuinely funny look through what the big man likes to eat, with great photos and 50 mouthwatering dishes." -- The Malestrom "I don't think I've read a cookery book with such unfettered joy this year." -- Tom Tivnan, The Bookseller