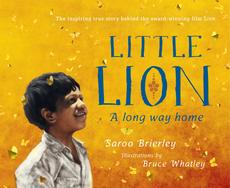 The extraordinary true story of survival that became an international bestseller and was made into the award-winning film, Lion , starring Nicole Kidman and Dev Patel. Now a stunning picture book illustrated by award-winning illustrator Bruce Whatley. Can you imagine being lost and not finding your way home again? Saroo Brierley became lost on a train in India when he was only five. He survived for weeks on the streets, before being taken into an orphanage and adopted by his Australian family. Despite being happy, Saroo always wondered about where he was from. And one day, after years of searching, he miraculously found what he was looking for. This incredible true story celebrates the importance of hope and never giving up.

Saroo Brierley (Author) Saroo Brierley was born in Khandwa, Madhya Pradesh, India. In 1986, when he was aged only five, he lost all contact with his family when he became lost and was separated from his older brother at a train station in India. He never saw his brother again. Not knowing the name of his family or where he was from, he survived for weeks on the streets of Calcutta, before being taken into an orphanage and adopted by a family in Australia. He grew up with his new parents in Hobart, Tasmania for the next 25 years. Saroo's virtual odyssey of his homeland and search for his home town and his mother made headlines across the world in 2012. His full story is recounted in his internationally bestselling autobiography, A Long Way Home, young readers' edition Lion- A Long Way Home and picture book Little Lion- A Long Way Home . The film Lion , based on his autobiography, was released in November 2016 and nominated for four Golden Globe and six Academy Awards, and won many other international awards. The film stars Nicole Kidman, Dev Patel and David Wenham. Since publication his books continue to be bestsellers and have been published in multiple overseas territories. Bruce Whatley (Illustrator) Since 1992 Bruce Whatley has written and/or illustrated more than 90 children's picture books. His internationally award-winning titles include his first two books, The Ugliest Dog in the World and Looking for Crabs. He often writes with his wife Rosie Smith and has also had much success with the Diary of a Wombat series created with Jackie French. Bruce uses a variety of illustration mediums including gouache, pen and ink, pencil, oils, watercolour and more recently CGI software. Tin Toys, The Watchmaker Who Saved Christmas and Ruben are classic examples of his search for new ways to create images. Bruce and Rosie live on the south coast of New South Wales.