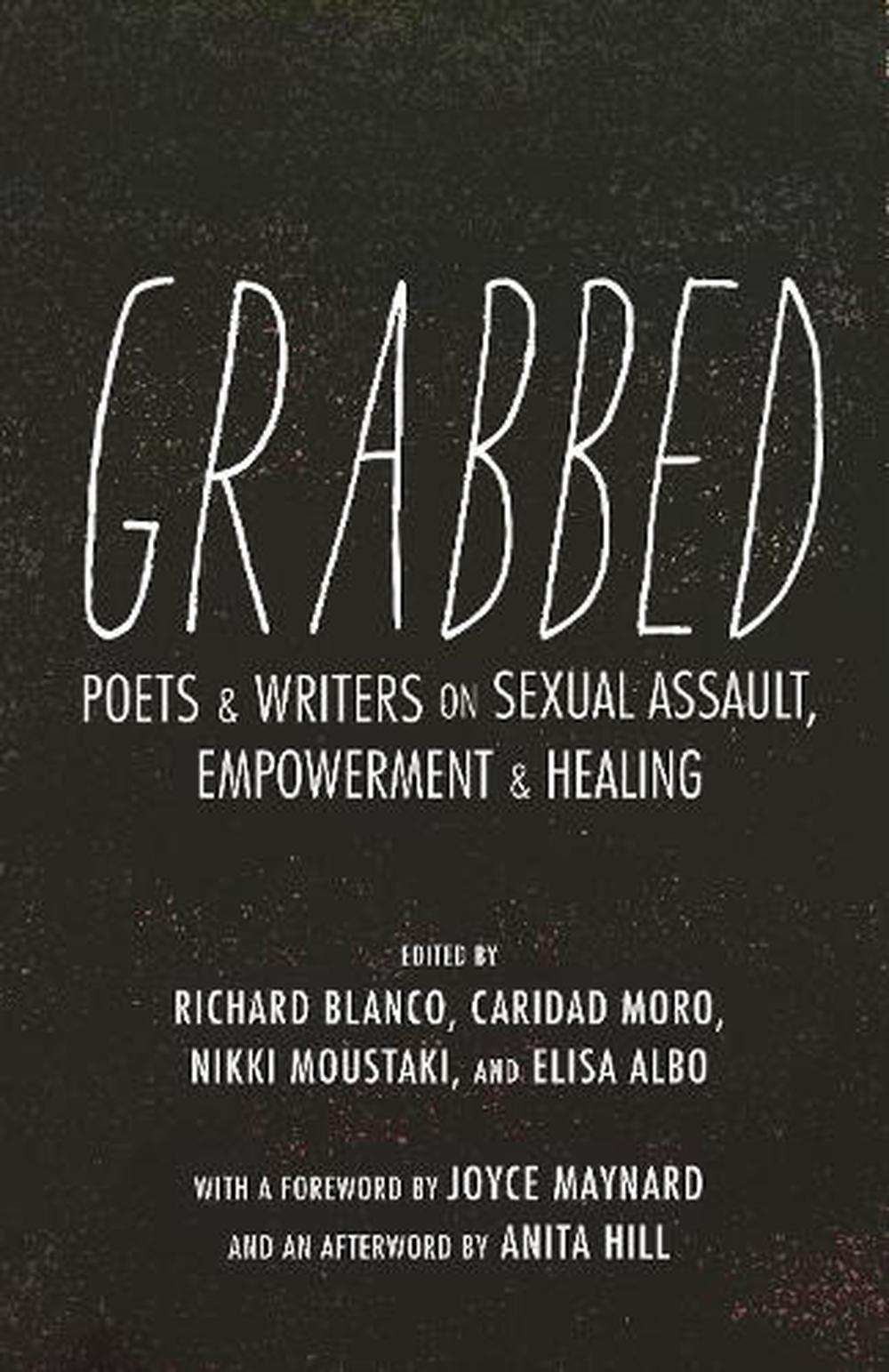 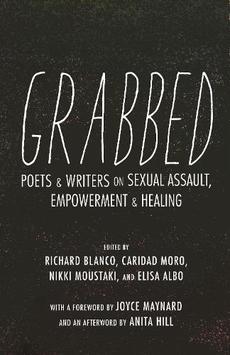 The #MeToo movement, the infamous Access Hollywood tape, and the depraved and hypocritical actions of celebrities, politicians, CEOs, and other powerful people have caused people all over the nation to speak out in outrage, to express allegiance for the victims of these assaults, and to raise their voices against a culture that has allowed this behavior to continue for too long. The editors asked writers and poets to add to the conversation about what being "grabbed" means to them in their own experience or in whatever way the word "grabbed" inspired them. What they received are often searing, heart-rending works, ranging in topic from sexual misconduct to racial injustice, from an unwanted caress to rape, expressed in powerful, beautifully crafted prose and poetry. The writers represented here, some very well known, such as Rita Dove, Jericho Brown, Eileen Miles, Ana Menendez and Sapphire, as well as some newer voices not yet fully discovered, have mined their collective experiences to reveal their most vulnerable moments, and in some cases, to narrate moments that they have had previously been unwilling or unable to speak of. What results is a collection of emotional, hard-hitting pieces that speak to the aftermath of violation - whether mental, emotional, or physical.

Richard Blanco is the award-winning author of several books. Blanco's poetry collections include City of a Hundred Fires, Directions to the Beach of the Dead, and How to Love a Country . He currently serves as the first-ever Education Ambassador for the Academy of American Poets and is a member of the Obama Foundation's advisory council. Caridad Moro is the award-winning author of Visionware. She is the recipient of an Elizabeth George Foundation Grant and a Florida Individual Artist Fellowship in poetry. Her poems and essays have been nominated for the Pushcart Prize and Best of the Net and have appeared in numerous publications and anthologies. She is the Associate Editor for the daily online literary journal, SWWIM Every Day . Nikki Moustaki is the author of the memoir, The Bird Market of Paris . She is the recipient of a National Endowment for the Arts grant in poetry, along with many other national writing awards. Her poetry, fiction, and essays have appeared in various literary magazines, anthologies, and textbooks. Elisa Albo is the author of the poetry collection Passage to America and Each Day More, a collection of elegies. Her poems have appeared in many journals and anthologies.

FOREWORD By Joyce Maynard INTRODUCTION By Caridad Moro-Gronlier I. STRANGERS What We Did This Year by Freesia McKee The Truth Is I Never Left You by V. Alexandra Regalado Sweet Sixteen by Brenda Cardenas She Said Stop Here by Cynthia White Found Poem: Chorus to a Girl by Holly Mitchell Flashbulb Memory by Iris Jamahl Dunkle Kidnapped Girls by Catherine Gonick Hitchhiker by Cynthia White Tuesdays by Yvonne Cassidy Duplex by Jericho Brown Sawdust by David Moscovich Doctor''s Office, First Week In This Country by Javier Zamora Dispatch From My Early 20s by Catherine Esposito Prescott The Man With The Violin Case by Ruth Behar Grabbed Villanelle by Catherine Esposito Prescott Tenement Trick by Vanessa Garcia Yellow American Women by Marci Calabretta Cancio-Bello Popponesset by Eileen Myles That Autumn Sunday by Gerry La Fermina Daughter, They''ll Use Even Your Own Gaze To Wound You by Beth Ann Fennelly Bingo Night For Missing and Exploited Children by MB McLatchy 105 Degrees, South by Lucia Leao Epistle From The Hospital For Harassment by Jenny Molberg In Support of Violence by Christopher Soto Creation Story by Mia Leonin Angel Heart In Istanbul by Caitlin McDonald Layover by Jericho Brown When In Madagascar by Vikki Hendricks The Opposite of Monsters by Laura Lee Huttenbach The Worlds Words Make by Zoe Welch In Guiding Dragon-Wasp Behavior Of Deviant Tentacles Beneath The underskirt Of An Unsuspecting Queen by Catherine Moore The Shape of Other People by Kelly Sundberg II. INSTITUTIONS Where To Bow To The Will of The Majority by Jen Karetnick Women Have Been Trained by Marge Piercy The Pallor of Survival by Laure-Anne Bosselaar Like Judith Slaying Holofernes by Paul Tran me too by Nicole Callihan Girl at The Window by Rhonda J. Nelson Redemption by Barbra Nightingale Here''s My Pussy by Nicole Callihan How We Lived by Emma Trelles Sky by Michael Hettich Questionnaire For Two Pussies by Maureen Seaton and Denise Duhamel GB2G4 by Michael Mackin O''Mara Me Too--The Fall of Man by Cynthia Neely A Brief History in Pink by Michael Mackin O''Mara One In Four by David McLoghlin The Peach Orchard by Rita Dove Recipe For Resistance by Jen Karetnick Killing by Miriam Bird Greenberg Testimony by Denise Duhamel Words That Know the Sun by Yaddyra Perlalta Body Politic by Bosch Jones Speaker of the House by Sapphire It''s Just Words, Folks, It''s Just Words by Denise Duhamel III. IMPOSTERS Grope by Jessica Cuellar At Least I Didn''t Rape You by Caridad Moro Cocoa Beach by Terry Godbey Crank Caller by Nikki Moustakki Sweet Sixteen by Terry Godbey Summer Job, Circa 1997 by Catherine Esposito Prescott Puerto Rican Pussy by Ana Menendez Up For Grabs by Maggie Smith Me Too Limerick with Drum Beats by Brenda Hillman What She Told Me by Silvia Curbelo Pink Underpants by Molly Peacock El Americano in the Mirror by Richard Blanco Threshold by Julie Marie Wade and Denise Duhamel When A White Man Attempts to Steal Your Soul by Hari Zyiad Said The Poet by Jenny Molberg NY At International Judo Camp by Kyle Lopez The Gift Rita by Maria Martinez Date Grape by Freesia McKee For A Minute There, I Though We Could''ve Been Happy by Cathleen Chambless IV. HOME Too Old For That, Now by Caridad Moro Blackout by Elisa Albo At Any Age by Elisa Albo A Root by Annie Finch The Things Ma Says by Bosch Jones The Lion Head Belt Buckle by Virgilio Suarez X Marks The Spot by Oliver Brantome Those Sundays by Christopher Soto Learning by Gail Carson Levine Telling by Ivonne Lamazares Psych Ward by Colleen Sutton Because What We Do Does Not Die by Ellen Bass Gender Bender by Jennifer Michael Hecht In Memoriam, Ann by Debra Dean Blindsided by Angela Bonavoglia First Kiss by Lynne Barrett Cuban Girls Don''t Wear Tampons by Caridad Moro Seven Times Seven by Trish MacEnulty AFTERWORD By Anita Hill