ISBN: 9780448479859
ANNOTATION:
Galileo is another Renaissance great known just by his first name. A name that is synonymous with scientific achievement. Born in Italy, in the sixteenth century, Galileo contributed to the era's great rebirth of knowledge. He invented a telescope with which he was able to observe the heavens. 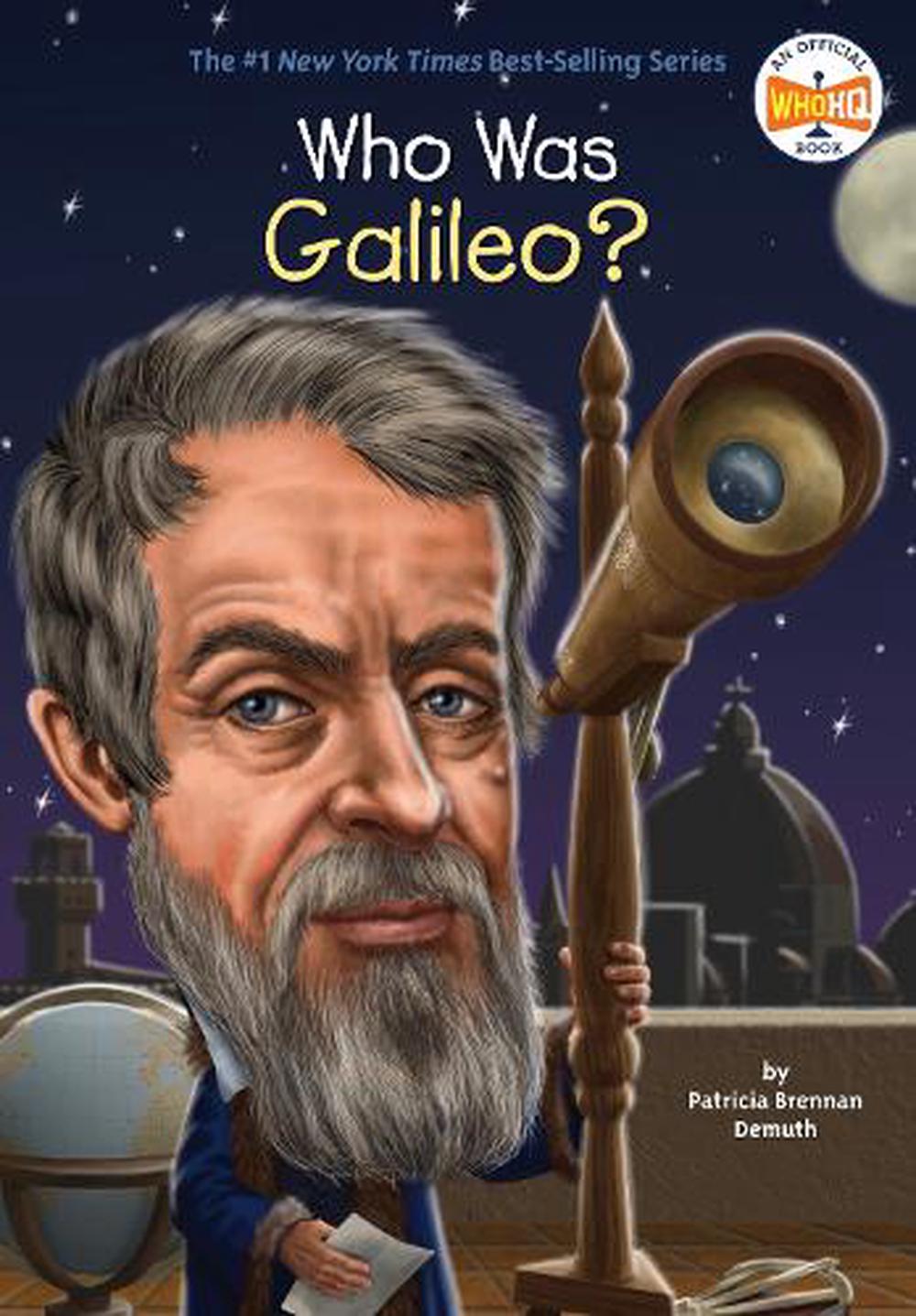 OTHER FORMATS:
ISBN: 9780448479859
ANNOTATION:
Galileo is another Renaissance great known just by his first name. A name that is synonymous with scientific achievement. Born in Italy, in the sixteenth century, Galileo contributed to the era's great rebirth of knowledge. He invented a telescope with which he was able to observe the heavens.

Galileo is another Renaissance great known just by his first name. A name that is synonymous with scientific achievement. Born in Italy, in the sixteenth century, Galileo contributed to the era's great rebirth of knowledge. He invented a telescope with which he was able to observe the heavens.

Like Michelangelo, Galileo is another Renaissance great known just by his first name--a name that is synonymous with scientific achievement. Born in Pisa, Italy, in the sixteenth century, Galileo contributed to the era's great rebirth of knowledge. He invented a telescope to observe the heavens. From there, not even the sky was the limit! He turned long-held notions about the universe topsy turvy with his support of a sun-centric solar system. Patricia Brennan Demuth offers a sympathetic portrait of a brilliant man who lived in a time when speaking scientific truth to those in power was still a dangerous proposition.

Patricia Brennan Demuth is the author of Who Was Laura Ingalls Wilder?, Who Is Bill Gates?, What Was Ellis Island?, and What Was Pearl Harbor?

Who Was Galileo? August 1609. Padua, Italy. It was a bright, starry night. A scientist named Galileo walked outside to his back garden. He carried a new telescope that he''d made himself. For weeks, Galileo had been carefully grinding the lenses. Now his telescope could enlarge objects many times their size. Galileo pointed the telescope upward. Dazzling sights leaped into view--sights no one had ever seen. How could they? These sights were not visible to the naked eye. Over the next few weeks, Galileo roamed the heavens with his telescope. What he saw amazed him. Mountains rose up from the moon''s surface! New stars took form from fuzzy patches in the sky! Moons circled Jupiter! Yet Galileo''s discoveries led him into trouble. Terrible trouble. What he saw convinced him that the sun was the center of the universe--not the Earth. In 1609 this was a strange idea. For thousands of years, people thought that the sun and all the planets circled Earth once a day. The Catholic church held this belief as well. When Galileo lived, the church was very powerful in Italy. It had its own court, called the Inquisition. The Inquisition could arrest and try heretics--anyone who spoke against the church''s teachings. Heretics were sometimes tortured, even killed. Galileo was torn. He himself was a faithful Catholic who honored church teachings. Yet his own eyes pointed him to a different truth. This truth would put his life at stake. Chapter 1: Boyhood On February 15, 1564, Galileo was born in Pisa, Italy. His full name had a musical ring: Galileo Galilei (gal-uh-LAY-oh gal-uh-LAY). Yet the great scientist became known by just his first name. Italy honored its most famous citizens that way, including the painter Michelangelo. Even books by Galileo were printed without his last name. And today, encyclopedias list him simply as Galileo. He was born into an exciting age known as the Renaissance. Discovery was in the air. Europe was exploding with a renewed interest in the arts and science. In 1564 the English writer William Shakespeare was born, and Michelangelo died. Both men, along with Galileo, went down in history as geniuses of the Renaissance. The printing press, invented in 1454, allowed books to be mass-produced instead of being copied by hand, one by one. With more books, more people began to read. Artists such as Michelangelo and Leonardo da Vinci created beautiful paintings, sculpture, and architecture. With improved seagoing instruments, explorers bravely set sail for uncharted lands. Christopher Columbus arrived in the New World of the Americas in 1492. Ferdinand Magellan''s crew sailed around the globe, returning in 1522. And in 1607, when Galileo was forty-three, settlers arrived in Jamestown and founded one of the first English settlements in North America. Pisa was a beautiful old city by the River Arno. Its cathedral was already five centuries old when Galileo was born. Pisa''s most famous landmark stood--or rather, tilted --beside the cathedral. It was called the Leaning Tower because it looked ready to topple at any moment. Galileo was the firstborn child. His mother and father both came from noble Italian families. However, that didn''t mean the couple was wealthy. Galileo''s father, Vincenzio, worked hard as a musician. He sang, played the lute, wrote songs, and taught. Vincenzio also wrote books about music theory. His books stirred up trouble. Songwriters were supposed to follow strict rules for composing. But Vincenzio questioned the rules. He even added notes to the scale! Old masters tried to stop one of his books from being published. Vincenzio, however, was able to push it into print. "I . . . wish to be allowed freely to question . . . in search of truth," he said. Young Galileo listened carefully. Years later, he would be bold and outspoken, too. Even as a boy, Galileo was gifted. His curiosity had no limits. He took apart machines to see how they worked. And he invented clever little toys and moving gadgets of his own. Galileo also spent hours and hours learning music and drawing. His father taught him to play the lute. This stringed instrument was as popular then as guitars are now. Playing the lute became a lifelong passion for Galileo. From tutors, he learned to draw in perspective, which meant things looked as if they were in three-dimensional space. He practiced drawing objects and scenes until they looked perfectly lifelike. Years later, Galileo''s art skills would come in very handy. When Galileo was eight, his family moved to Florence. Vincenzio had a wonderful new job playing music at the royal court. Galileo remained in Pisa to study with tutors, and then he joined the rest of his family. Florence was a thrilling place to live. During the Renaissance, the city was a center for learning and the arts. It was the capital city of an area called Tuscany. Vincenzio''s job at the palace let the family mingle with dukes and princes. At age eleven, Galileo was sent to a monastery to begin school. There the Catholic monks taught him everything an educated person of the 1500s needed to know. Galileo learned the Greek and Latin languages. And he studied the ancient subject of logic, learning how to break down and solve complex problems in an orderly way. Galileo also studied religion. It interested him so much that he decided to become a monk. The idea horrified his father. As the oldest son, Galileo was expected to support his family one day. A poor monk couldn''t do that. Vincenzio quickly withdrew Galileo from the monastery. After that, Galileo lived at home and studied at a nearby school. At seventeen, Galileo was ready for university. Back then, very few young men had the chance to attend one. Only the sons of rich or noble families could usually afford to go. (Girls were not allowed to enter.) But Vincenzio was determined to give his smart son the best education possible.