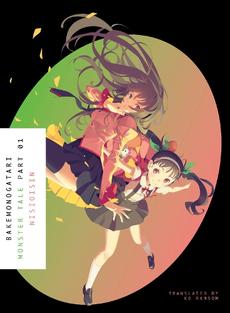 ISBN: 9781942993889
ANNOTATION:
High schooler Koyomi, now a vampire after his experiences during Wound Tale, hears rumors of other supernatural activity and offers to help.
$22.63
Or pay later with

High schooler Koyomi, now a vampire after his experiences during Wound Tale, hears rumors of other supernatural activity and offers to help.

There s a girl at their school who is always ill. She routinely arrives late, leaves early, or doesn t show up at all, and skips gym as a matter of course. She s pretty, and the boys take to whispering that she s a cloistered princess. As the self-described worst loser in her class soon finds out, they just don t know what a monster she is.

There are few authors in Japan who have reached the heights of success as NisiOisin. Born in 1981, Nisio dropped out of Ritsumeikan University in Kyoto, to pursue a career in story-telling. Initially he had ambitions to be a comic artist, but when he realized his art was not up to snuff, he began to focus on his writing, eventually winning the 23rd Mephisto Prize, for Decapitation(Vertical) recognizing his talents as a mystery writer, at the age of 20. Since his debut in 2002 Nisio has penned more than 50 novels and a number of comics. And he has quickly become one of Japan's top selling author's in recent memory with more than 5 million units sold since 2009. In 2014, as in 2012, he was the top selling author in Japan (outselling Haruki Murakami by more than half a million units).

Nishio's works often cover themes of youth, but are framed in genres that are familiar to the masses. His works tend to mix mystery with comedy and touches or romance and/or the supernatural. He is a modern author in every sense, sometimes even experiementing with the Japanese language itself. Many of his works have been adapted into animated television series and films. His best known works are the Monogatari series and Katanagatari.