Modernist Cuisine: The Art and Science of Cooking

by Nathan Myhrvold and Chris Young 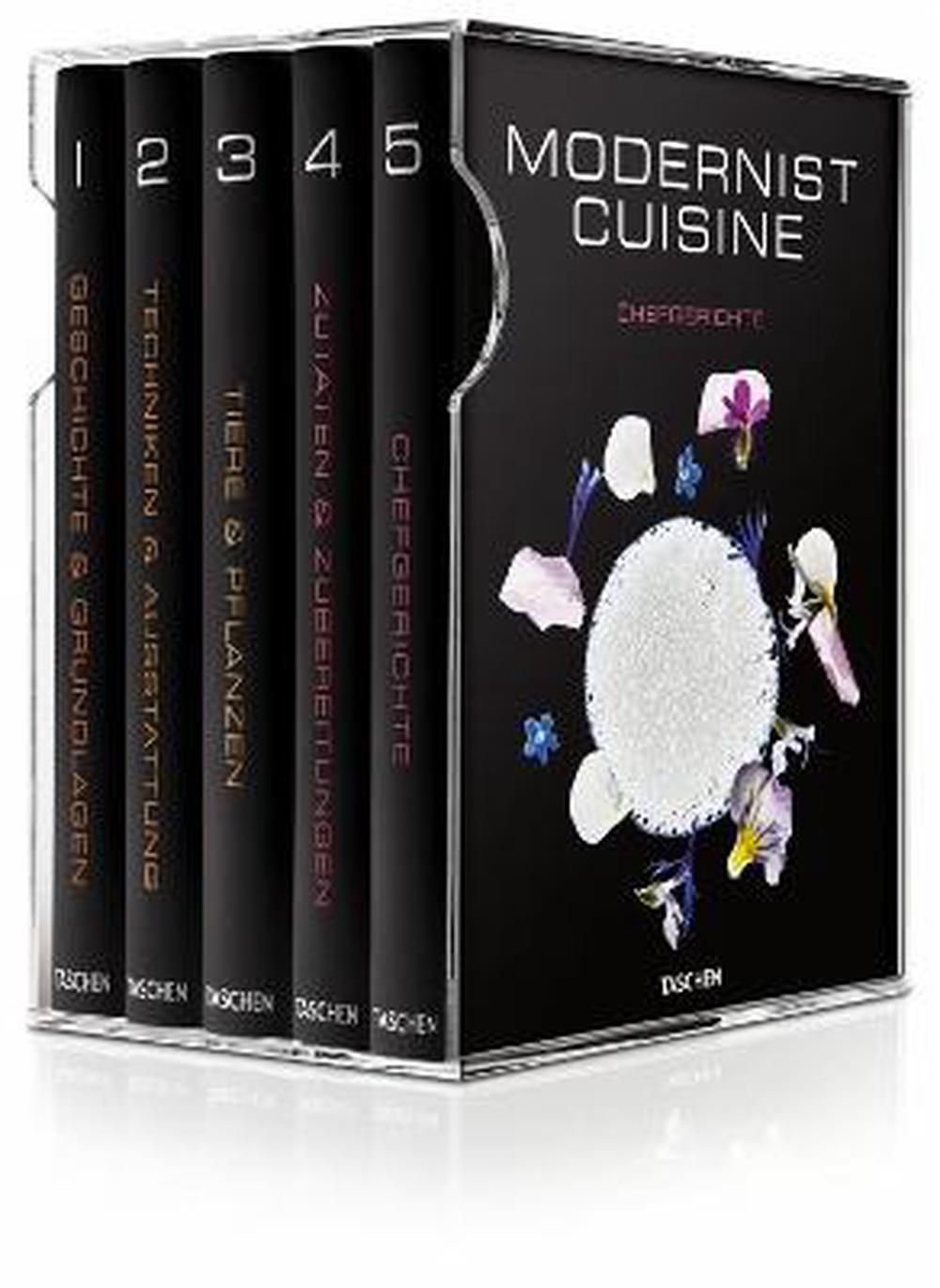 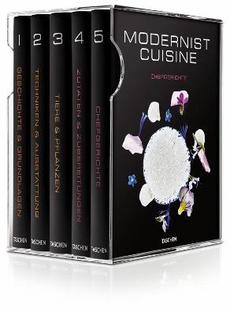 The authors—scientists, inventors, and accomplished cooks in their own right—have created a six-volume, 2,400-page set that reveals science-inspired techniques for preparing food that ranges from the otherworldly to the sublime.

A revolution is underway in the art of cooking. Just as French Impressionists upended centuries of tradition, Modernist cuisine has in recent years blown through the boundaries of the culinary arts. Borrowing techniques from the laboratory, pioneering chefs at world-renowned restaurants such as elBulli, The Fat Duck, Alinea, and wd~50 have incorporated a deeper understanding of science and advances in cooking technology into their culinary art. In Modernist Cuisine: The Art and Science of Cooking, Nathan Myhrvold, Chris Young, and Maxime Bilet--scientists, inventors, and accomplished cooks in their own right--have created a six-volume, 2,400-page set that reveals science-inspired techniques for preparing food that ranges from the otherworldly to the sublime. The authors and their 20-person team at The Cooking Lab have achieved astounding new flavors and textures by using tools such as water baths, homogenizers, centrifuges, and ingredients such as hydrocolloids, emulsifiers, and enzymes. It is a work destined to reinvent cooking. How do you make an omelet light and tender on the outside, but rich and creamy inside? Or French fries with a light and fluffy interior and a delicate, crisp crust that doesn't go soggy? Imagine being able to encase a mussel in a gelled sphere of its own sweet and briny juice. Or to create a silky-smooth pistachio cream made from nothing more than the nuts themselves. Modernist Cuisine offers step-by-step, illustrated instructions, as well as clear explanations of how these techniques work. Through thousands of original photographs and diagrams, the lavishly illustrated books make the science and technology of the culinary arts clear and engaging. Stunning new photographic techniques take the reader inside the food to see cooking in action all the way from microscopic meat fibers to an entire Weber grill in cross-section. You will view cooking and eating in a whole new light. A sampling of what you'll discover: Why plunging food in ice water doesn't stop the cooking process When boiling cooks faster than steaming Why raising the grill doesn't lower the heat How low-cost pots and pans can perform better than expensive ones Why baking is mostly a drying process Why deep-fried food tastes best and browns better when the oil is older How modern cooking techniques can achieve ideal results without the perfect timing or good luck that traditional methods demand. Many invaluable features include: Insights into the surprising science behind traditional food preparation methods such as grilling, smoking, and stir-frying The most comprehensive guide yet published on cooking sous vide, including the best options for water baths, packaging materials, and sealing equipment; cooking strategies; and troubleshooting tips More than 256 pages on meat and seafood and 130 pages on fruits, vegetables, and grains, including hundreds of parametric recipes and step-by-step techniques Extensive chapters explaining how to achieve amazing results by using modern thickeners, gels, emulsions, and foams, including example recipes and many formulas More than 300 pages of new recipes for plated dishes suitable for service at top-tier restaurants, plus recipes adapted from master chefs including Grant Achatz, Ferran Adria , Heston Blumenthal, David Chang, Wylie Dufresne, David Kinch, and many others. From the professional chef to the home cook, Modernist Cuisine is an indispensable guide for anyone who is passionate about the art and science of cooking.

Nathan Myhrvold is chief executive officer and a founder of Intellectual Ventures, a firm dedicated to creating and investing in inventions. In addition to stimulating the invention of others, Myhrvold is himself an active inventor, with more than 250 patents issued or pending-including several related to food technology. Until 1999, Myhrvold was the first chief technology officer at Microsoft, establishing Microsoft Research and overseeing many advanced technology projects. After working for two years as a stagier at Seattle's top French restaurant, Rover's, Myhrvold completed culinary training with renowned chef Anne Willan at the Ecole De La Varenne. In addition, he has worked as Chief Gastronomic Officer for Zagat Survey, publisher of the popular Zagat restaurant guidebooks. Myhrvold has contributed original research on cooking sous vide to online culinary forums, and his sous vide techniques have been covered in The New York Times Magazine, Wired, and Gourmet's Diary of a Foodie television series on PBS. Myhrvold's formal education includes degrees in mathematics, geophysics, and space physics from UCLA, and PhDs in mathematical economics and theoretical physics from Princeton University. In his post-doctoral work at Cambridge University, Myhrvold worked on quantum theories of gravity with the renowned cosmologist Stephen Hawking. Chris Young opened the experimental kitchen at The Fat Duck and worked under world-famous chef Heston Blumenthal for five years to help develop its most innovative dishes. Young completed degrees in mathematics and biochemistry at the University of Washington. He let behind his doctoral work for a job as commis chef at one of Seattle's top-rated restaurants, and quickly earned a reputation for his ability to apply science and technology in the kitchen. At The Fat Duck, Young expanded the experimental kitchen from one to more than six full-time chefs. He also coordinated the work of several consultant scientists. Beyond developing new dishes for The Fat Duck's menu, Young managed recipe development for the critically acclaimed first and second seasons of BBC's Heston Blumenthal: In Search of Perfection. Young has also written extensively on the science of food and cooking for The Fat Duck Cookbook and has published scholarly research in the Journal of Agricultural Chemistry and Food Science. Maxime Bilet received a BA in creative writing, literature, and visual art from Skidmore College. Bilet then graduated with highest honors from the Institute of Culinary Education in New York. He completed a stage at Jack's Luxury Oyster Bar and was quickly hired by Jack Lamb to be head chef there. Moving to London, he accepted a stage with Heston Blumenthal's development team at The Fat Duck. Just prior to joining the culinary team at The Cooking Lab as head chef of researchand development, Bilet trained as sous chef to open the London branch of Auberge de L'Ile.

"This book will change the way we understand the kitchen" - Ferran Adria A six-volume, 2,438-page set-including more than 3,200 original images-that is destined to reinvent cooking "The most important book in the culinary arts since Escoffier." - Tim Zagat"

Just as French Impressionists upended centuries of tradition, MODERNIST CUISINE has in recent years blown through the boundaries of the culinary arts. Borrowing techniques from the laboratory, pioneering chefs at world-renowned restaurants such as ElBulli, The Fat Duck, Alinea, and wd50 have incorporated a deeper understanding of science and technology into their culinary art.Nathan Myhrvold and his 20-person team at The Cooking Lab have achieved astounding new flavors and textures by using tools such as water baths, homogenizers, and centrifuges, and ingredients such as hydrocolloids, emulsifiers, and enzymes. The team has created a series of reference titles that reveal science-inspired techniques for preparing and photographing food that ranges from the otherworldly to the sublime. Modernist Cuisine: The Art and Science of Cooking, Modernist Cuisine at Home, and The Photography of Modernist Cuisine are works destined to reinvent cooking.