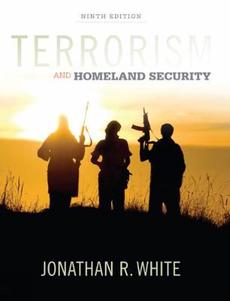 Packed with engrossing examples and the most cutting-edge coverage available, best-selling TERRORISM AND HOMELAND SECURITY provides a theoretical and conceptual framework that enables you to understand how terrorism arises and how it functions. Acclaimed national terrorism expert Jonathan R. White discusses the theories of the world's best terrorist analysts, while focusing on the domestic and international threat of terrorism and basic security issues. You'll learn about the essential historical background on the phenomenon of terrorism and the roots of contemporary conflicts, current conflicts shaping the world stage, emerging groups (i.e., Boko Haram, Ansaru, and ISIS), and theoretical and concrete information about Homeland Security organizations. Each chapter also contains a new analysis of probable future trends in terrorism and security. The analysis of homeland security also discusses controversies surrounding human rights and protecting civil liberties. What's more, the MindTap that accompanies this text helps students practice and master techniques and key concepts while engaging them with video cases, career scenarios, visual summaries, and more.

Jonathan R. White--a national expert on the topic of terrorism--is executive director of the Homeland Security Initiative. Immediately prior to that appointment, Dr. White served as dean of Social Sciences at Grand Valley State University. He has instructed on terrorism, militarism, criminology, police administration, philosophy, and justice in Western civilization. Since 1998, he has worked as an adjunct instructor with the State and Local Anti-Terrorism Training (SLATT) Program. A recognized expert on Middle Eastern extremism, Dr. White used his knowledge to develop and strengthen the SLATT

TERRORISM IN HISTORICAL AND SOCIAL CONTEXTS.