Jesus and the Dead Sea Scrolls 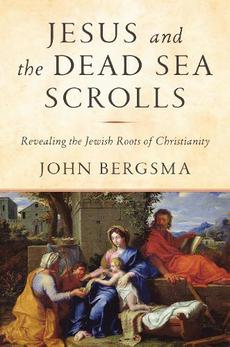 OTHER FORMATS:
PUBLISHED: 10th September 2019
ISBN: 9781984823120
ANNOTATION:
From award-winning scholar Bergsma comes an illuminating book that reveals new insights on the Essenes, a radical Jewish community predating Christianity, whose existence, beliefs, and practices are often overlooked in the annuls of history.

From award-winning scholar Bergsma comes an illuminating book that reveals new insights on the Essenes, a radical Jewish community predating Christianity, whose existence, beliefs, and practices are often overlooked in the annuls of history.

From popular Old Testament scholar John S. Bergsma comes an illuminating text that reveals a Jewish community predating Christianity, whose existence, beliefs, and practices have long been ignored by scholars and the public for social and political reasons- the Essenes. Bergsma, one of only a handful of American scholars who has had access to the original Dead Sea manuscripts, reveals how this radical pre-Christian Jewish religious community directly influenced the beliefs and early practices of early Christianity. This connection offers new information on how early Christians lived their lives, worshiped, and eventually went on to influence the Roman Empire. Bergsma also looks to Hebrew Scriptures and Jewish tradition to frame a story of how a simple Jewish peasant could go on to found a religion and a philosophy that still resonates 2,000 years later.

In this enlightening read, Dr. Bergsma demonstrates how the Dead Sea Scrolls--the world's greatest modern archaeological discovery--can deepen our appreciation of Scripture and strengthen our understanding of faith.

DR. JOHN BERGSMA, PhD, has been Professor of Theology at the Franciscan University of Steubenville (Ohio) since 2004. He holds a BA in Classical Languages from Calvin College (Grand Rapids, MI), the Master of Divinity and Master of Theology from Calvin Theological Seminary (Grand Rapids, MI), and a PhD in Theology from the University of Notre Dame (South Bend, IN). He is the author of The Jubilee from Leviticus to Qumran (2007), and several articles in Biblica, Vetus Testamentum, the Journal of Biblical Literature, the Journal of Markets & Morality, and other scholarly journals, festschrifts, dictionaries, encyclopedias, and essay collections, published by Oxford, Brill, Eerdmans, Continuum, Kohlhammer, and other academic publishers. Bergsma is active in professional biblical scholarship, and has particular expertise in covenant scholarship, the Pentateuch (its dating and sources), the book of Ezekiel, and the Dead Sea Scrolls. A former Protestant pastor, Bergsma entered the Catholic Church in 2001. He and his wife, Dawn, reside with their children in Steubenville, Ohio.

"The Dead Sea Scrolls give us a window into the thought of first-century Jews such as Jesus and the disciples. Through that window we see the continuity between the Old Testament and the New. The New is not a novelty. An expert on the Scrolls, Dr. Bergsma shows us how the texts and rituals of the Qumran community illuminate the New Covenant sacraments and Christian liturgy as we know it today."--Scott Hahn, author of The Fourth Cup "John Bergsma has provided the missing link between the assembly of the Old Testament and the Church of the New Testament. Read this book and you'll see the Gospels and the sacraments more vividly than ever before. You'll understand your place in history and in God's people. If you read just one book about first-century Judaism, let it be this one."--Mike Aquilina, author of The Fathers of the Church

"Since the Dead Sea Scrolls were first discovered in 1947, there have been countless books written about them. But there is nothing quite like what John Bergsma has done in Jesus and the Dead Sea Scrolls. If you have any interest whatsoever in the Jewish roots of Christianity, then buy this book! It will radically transform the way you see Jesus, Judaism, and the origins of Christianity."--Brant Pitre, author of Jesus and the Jewish Roots of the Eucharist