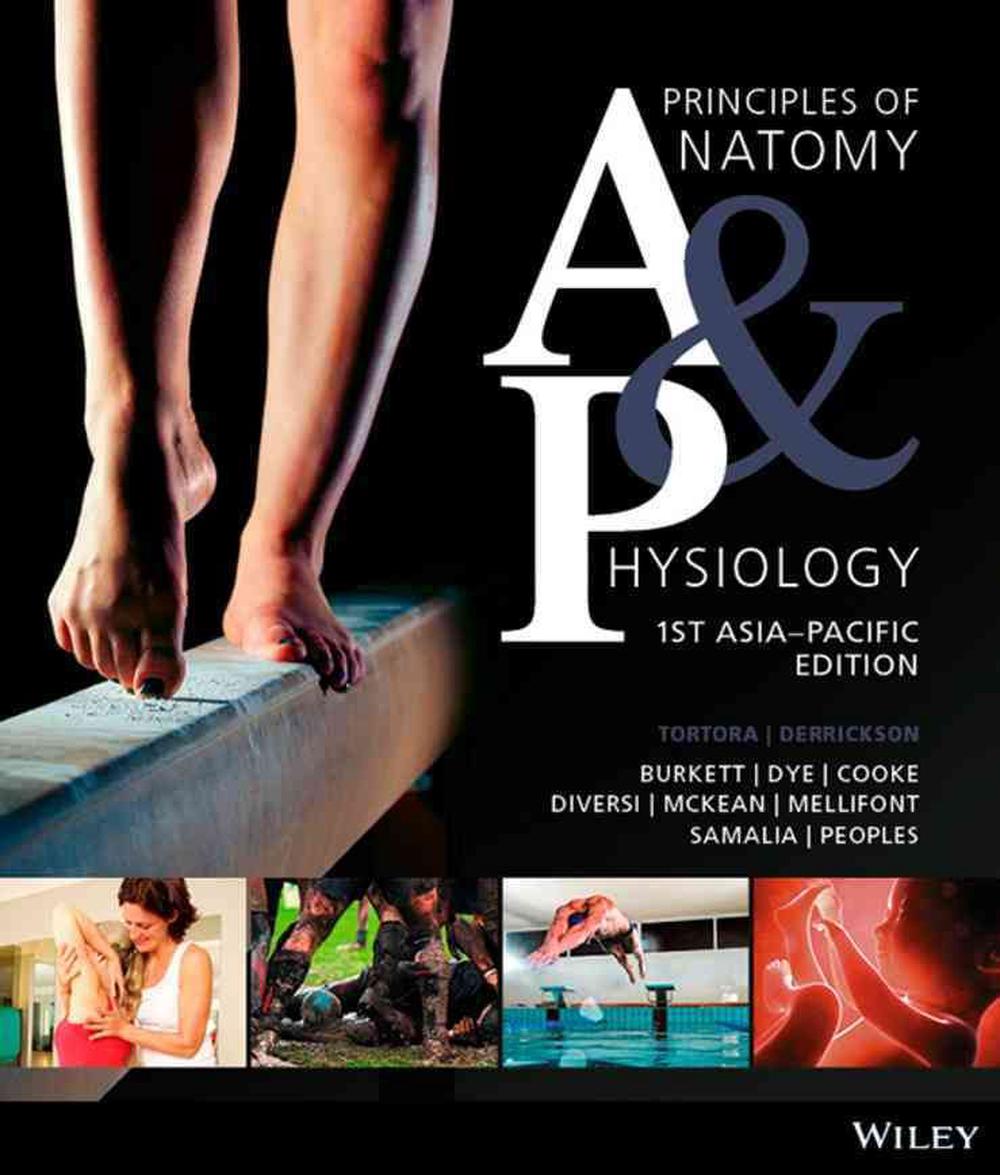 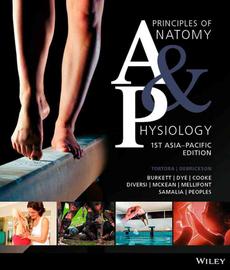 Anatomy and physiology students face the challenge of synthesising a lot of information into conceptual understanding.

Anatomy and physiology students face the challenge of synthesising a lot of information into conceptual understanding. Principles of Anatomy and Physiology, 1st Asia-Pacific edition,empowers them to improve their learning outcomes and have a great time navigating through a remarkable local tour of the human body! This title provides an excellent introduction to anatomy and physiology, and helps you answer a variety of questions including: How did cutting-edge research by the University of Queensland create the cervical cancer vaccine? Why do fast bowlers and ballet dancers frequently suffer from stress fractures? How does the All Blacks' Haka stimulate nerve impulses? Why do Australia and New Zealand have the highest rates of melanoma in the world?

Jerry Tortora is Professor of Biology and former Biology Coordinator at Bergen Community College in Paramus, New Jersey, where he teaches human anatomy and physiology as well as microbiology. He received his bachelor’s degree in biology from Fairleigh Dickinson University and his master’s degree in science education from Montclair State College. He is a member of many professional organisations, including the Human Anatomy and Physiology Society (HAPS), the American Society of Microbiology (ASM), the American Association for the Advancement of Science (AAAS), the National Education Association (NEA), and the Metropolitan Association of College and University Biologists (MACUB).
Above all, Jerry is devoted to his students and their aspirations. In recognition of this commitment, Jerry was the recipient of MACUB’s 1992 President’s Memorial Award. In 1996, he received a National Institute for Staff and Organizational Development (NISOD) excellence award from the University of Texas and was selected to represent Bergen Community College in a campaign to increase awareness of the contributions of community colleges to higher education.
Jerry is the author of several best-selling science textbooks and laboratory manuals, a calling that often requires an additional 40 hours per week beyond his teaching responsibilities. Nevertheless, he still makes time for four or five weekly aerobic workouts that include biking and running. He also enjoys attending college basketball and professional hockey games and performances at the Metropolitan Opera House.

Bryan Derrickson is Professor of Biology at Valencia College in Orlando, Florida, where he teaches human anatomy and physiology as well as general biology and human sexuality. He received his bachelor’s degree in biology from Morehouse College and his Ph.D. in cell biology from Duke University. Bryan’s study at Duke was in the Physiology Division within the Department of Cell Biology, so while his degree is in cell biology, his training focused on physiology. At Valencia, he frequently serves on faculty hiring committees. He has served as a member of the Faculty Senate, which is the governing body of the college, and as a member of the Faculty Academy Committee (now called the Teaching and Learning Academy), which sets the standards for the acquisition of tenure by faculty members. Nationally, he is a member of the Human Anatomy and Physiology Society (HAPS) and the National Association of Biology Teachers (NABT). Bryan has always wanted to teach. Inspired by several biology professors while in college, he decided to pursue physiology with an eye to teaching at the college level. He is completely dedicated to the success of his students. He particularly enjoys the challenges of his diverse student population, in terms of their age, ethnicity, and academic ability, and finds being able to reach all of them, despite their differences, a rewarding experience. His students continually recognise Bryan’s efforts and care by nominating him for a campus award known as the ‘Valencia Professor Who Makes Valencia a Better Place to Start’. Bryan has received this award three times.

Brendan Burkett (OAM) is a professional engineer, a Professor in Biomechanics at the University of the Sunshine Coast, and a Paralympic swimming champion. Brendan competed at 4 Paralympic Games and won several medals, leading the Australian team into the opening ceremony at the Sydney 2000 Games. The combination of engineering and human movement qualifications, along with sporting experience, has provided Brendan with a solid understanding of human anatomy and the requirements for ‘sport spotlights’. His focus on sports technology for people with disability is recognised through his Institution of Engineers, Australia, award in 2000 for Professional Engineer of the Year, and by his participation in the 2008 Prime Minister’s 2020 Summit.

Danielle Dye is a Lecturer in human biology, histology, biotechnology and research methods at Curtin University, having commenced there in 2010 as an Early Career Research Fellow. She holds a PhD in cell biology from the University of Western Australia and a BSc (Honours) from Curtin University. Danielle’s research focuses on the interactions between cells and the extracellular environment, with a dual focus on melanoma metastasis and muscle regeneration. She has published over thirty journal articles and one book chapter. She is active on the Western Australia committees of the Australian Society for Medical Research and the Human Genetics Society of Australasia.

Julie Cooke is an Assistant Professor Anatomy and Physiology in the discipline of sport and exercise science at the University of Canberra. Julie commenced her teaching career in 1998 at the Copenhagen International School where she taught biology. She completed a BSc (Hons) at Flinders University, South Australia, and received her PhD from the University of Adelaide in 2000. Julie has a passion for teaching and enjoys engaging students so that studying is easier and more enjoyable. She is an active member of Exercise Sports Science Australia and Sports Medicine Australia.

Tara Diversi (BHSc, GradDipPsyc, PostGradDipPsyc, MBA, MNutr&Diet) is an Assistant Professor of Nutrition and Dietetics at Bond University. She is an accredited practising dietitian and advanced sports dietitian. Her current research is aligned with her sporting passion of marathon and channel swimming. She has worked a number of years as an expert in holistic nutrition in private practice, private and public health consultancy, media and academia. Tara combines her expertise in nutrition with food psychology to help people achieve outcomes that are personalised, sustainable and suited to their individual lifestyle and goals. She lives with her family on their grass-fed cattle property in north Queensland.

Rebecca Mellifont is a Senior Lecturer in Sport Science (Anatomy) at the University of the Sunshine Coast. She completed her postdoctoral studies at the Sport Science Institute of South Africa in Cape Town, and in 2011 completed a Graduate Certificate of Professional Learning. Rebecca’s interests have developed from her PhD research in comparative anatomy, and her current research interests lie in the study of the biomechanics and three-dimensional gait analysis in children and sport applications, particularly swimming technique (and race analysis). Rebecca has been a biomechanist and sport scientist for the Australian Paralympic Swim Team, and has an interest in the scholarship of teaching and developing ways to improve the delivery and uptake of material (lecture and practical) in a higher education setting.

Latika Samalia is a Professional Practice Fellow at the Anatomy Department of the University of Otago, Dunedin, New Zealand, where she teaches clinical anatomy in a number of undergraduate and postgraduate professional courses. She teaches the early and advanced learning in medicine, head and neck anatomy to dental students, and musculoskeletal and reproductive anatomy to physiotherapy and pharmacy students. Latika received her medical degree (DSM) from the Fiji School of Medicine and her postgraduate degree in Science in Anatomy from the University of Otago.
After practising obstetrics and gynaecology for a number of years, she took up academia. Latika has been instrumental in initiating and running a number of postgraduate anatomy workshops in her department, focusing on various clinical disciplines. She is passionate in promoting clinical anatomy education and is a highly devotedÂ  teacher, having been rewarded with several student and university teaching awards.

Gregory Peoples (Bachelor of Biomedical Science, first class honours; PhD) is currently a Senior Lecturer in the School of Medicine at the University of Wollongong. His primary training is medical science with a particular research focus on exercise and nutritional physiology. His research publications have emphasised the important role of omega-3 fish oil in the human diet to optimise heart and skeletal muscle function. Gregory has ten years’ experience coordinating and lecturing undergraduate human anatomy and physiology at the University of Wollongong. His programs have been designed and implemented for students studying courses in exercise science and nutrition and have an emphasis on the applied nature of these professions, underpinned with a sound application of science.

1 An introduction to the human body 1

2 The chemical level of organisation 27

3 The cellular level of organisation 61

4 The tissue level of organisation 110

7 The skeletal system: the Axial skeleton 200

8 The skeletal system: the Appendicular skeleton 239

13 The spinal cord and spinal nerves 453

19 The cardiovascular system: the blood 678

20 The cardiovascular system: the heart 706

22 The lymphatic system And immunity E-CHAPTER