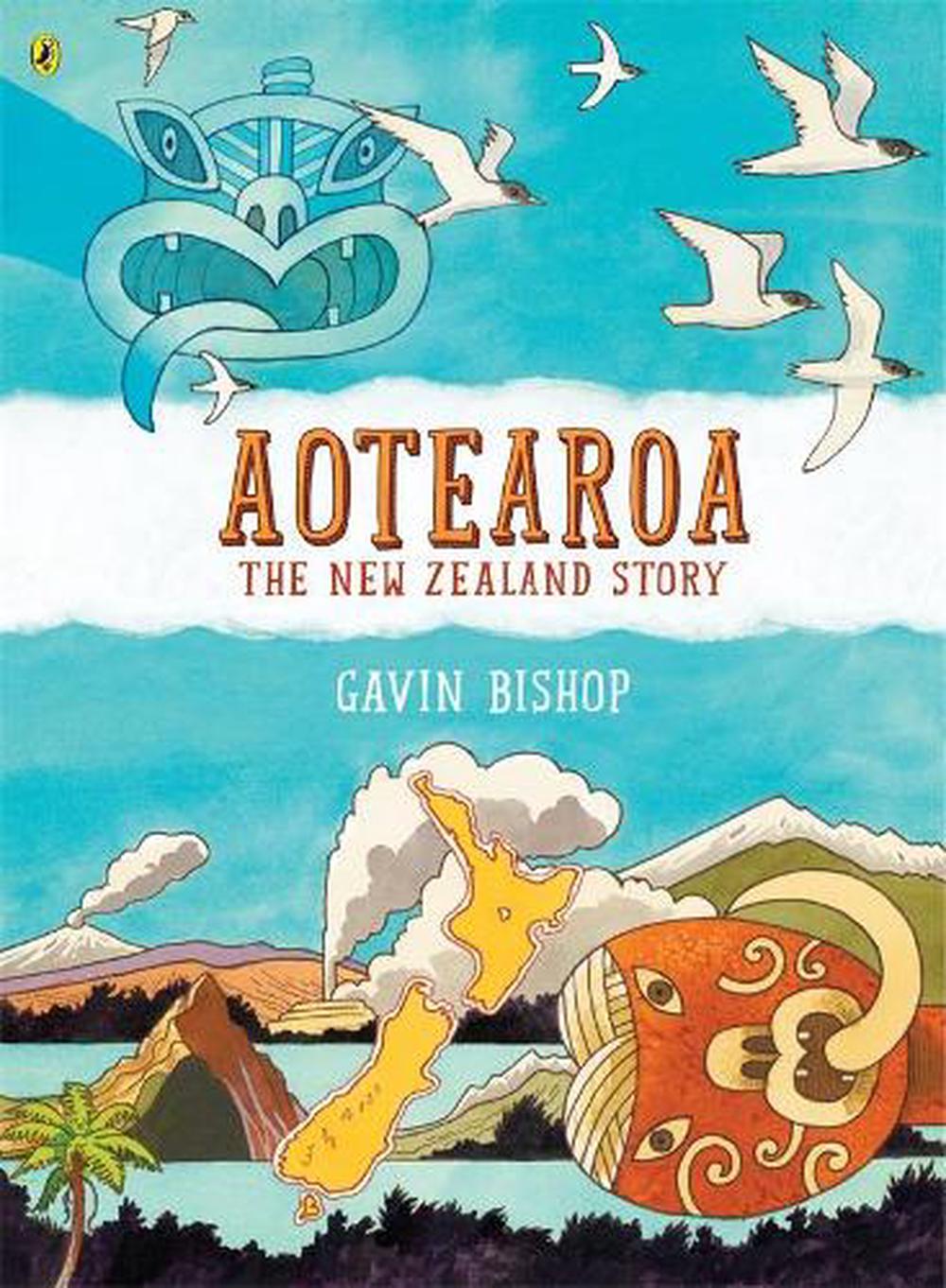 Over a thousand years ago, the wind, sea currents and stars brought people to the islands that became known as Aotearoa, the land of the long white cloud.

Navigate your way through this sumptuously illustrated story of New Zealand. Explore the defining moments of our history, captured by celebrated children's book creator Gavin Bishop, from the Big Bang right through to what might happen tomorrow. Discover Maori legends, layers of meaning and lesser-known facts.

A truly special book, Aotearoa- The New Zealand Story deserves a space on every bookshelf, to be taken off and pored over, thumbed and treasured, time and again.

Gavin Bishop is a highly acclaimed children's book author and illustrator of more than 60 books, whose work ranges from original stories to retellings of Maori myths, European fairy stories, and nursery rhymes.

Born in Invercargill, he spent his childhood in the remote railway settlement of Kingston on the shores of Lake Wakatipu. Studying under Russell Clark and Rudi Gopas, Gavin graduated from the Canterbury University School of Fine Arts with an honours degree in painting. He taught art at Linwood High School and at Christ's College in Christchurch.

Among the numerous fellowships and national book prizes that have been awarded to Gavin throughout his career, highlights are his Te Waka Toi Nga Tohu a Ta Kingi Ihaka/Sir Kingi Ihaka Award in 2018, recognising his lifetime contribution to strengthening Maori art and culture through his children's books; The Arts Foundation's Mallinson Rendel Illustrators Award in 2013; and the 2000 Storylines Margaret Mahy Medal for lifetime achievement and his distinguished contribution to children's literature in New Zealand. Gavin was made an Officer of the New Zealand Order of Merit in 2013, and President of Honour of the NZ Society of Authors.

In 2018, his book Aotearoa- The New Zealand Story won the supreme Margaret Mahy Book of the Year Award and the Elsie Locke Award for Non-fiction at the New Zealand Book Awards for Children and Young Adults. The judges praised it as being 'masterful in its execution - a work of art that bears repeated and thoughtful viewing and reading of its vibrant and informative illustrations. It is also a book of enduring significance in the canon of New Zealand children's literature - a landmark title which will stand the test of time.' That same year, Aotearoa won a Storylines Notable Non-Fiction Award and Best Children's Book at the PANZ Design Awards.

In 2003 Weaving Earth and Sky won the non-fiction section and the Book of the Year Award of the NZ Post Children's Book Awards and was shortlisted for the LIANZA Elsie Locke Medal. Gavin has won the LIANZA Russell Clark Medal for Illustration four times- Mrs McGinty and the Bizarre Plant (1981); Kiwi Moon (2006); Rats! (2008); and There was a Crooked Man (2010). The judges of the 2006 Russell Clark Award said, 'Kiwi Moon has all the appeal and promise of a future folktale classic. It is an outstanding example of how text and illustrations can be interwoven to produce a marvellous whole.' Among his successful partnerships has been that with writer Joy Cowley, with whom he won the Best in Junior Fiction and Book of the Year at the 2008 NZ Post Children's Book Awards for Friends- Snake and Lizard.

Gavin's artwork has featured in exhibitions internationally, including Japan and Czechoslovakia. He has written and designed two ballets for the Royal New Zealand Ballet Company- Terrible Tom and Te Maia and the Sea Devil. In 2003 he shared the Ursula Bethell Residency with Catherine Chidgey.

The Storylines Gavin Bishop Award for Picture Book Illustration was established in 2009 to encourage emergent illustrators and to acknowledge Gavin's contribution to the writing and illustrating of children's picture books.

Gavin lives and works in Christchurch, New Zealand. See more about him and his work at

Discover the story of New Zealand through this multiple-award-winning, richly illustrated visual history by Gavin Bishop.

Wonderful book. Thoroughly enjoying it.
By Sherideen
By Peter
By Helen
Avery I formative resourceful product. Definitely gets students engaged and inquiring. Love this book.
By Robyn