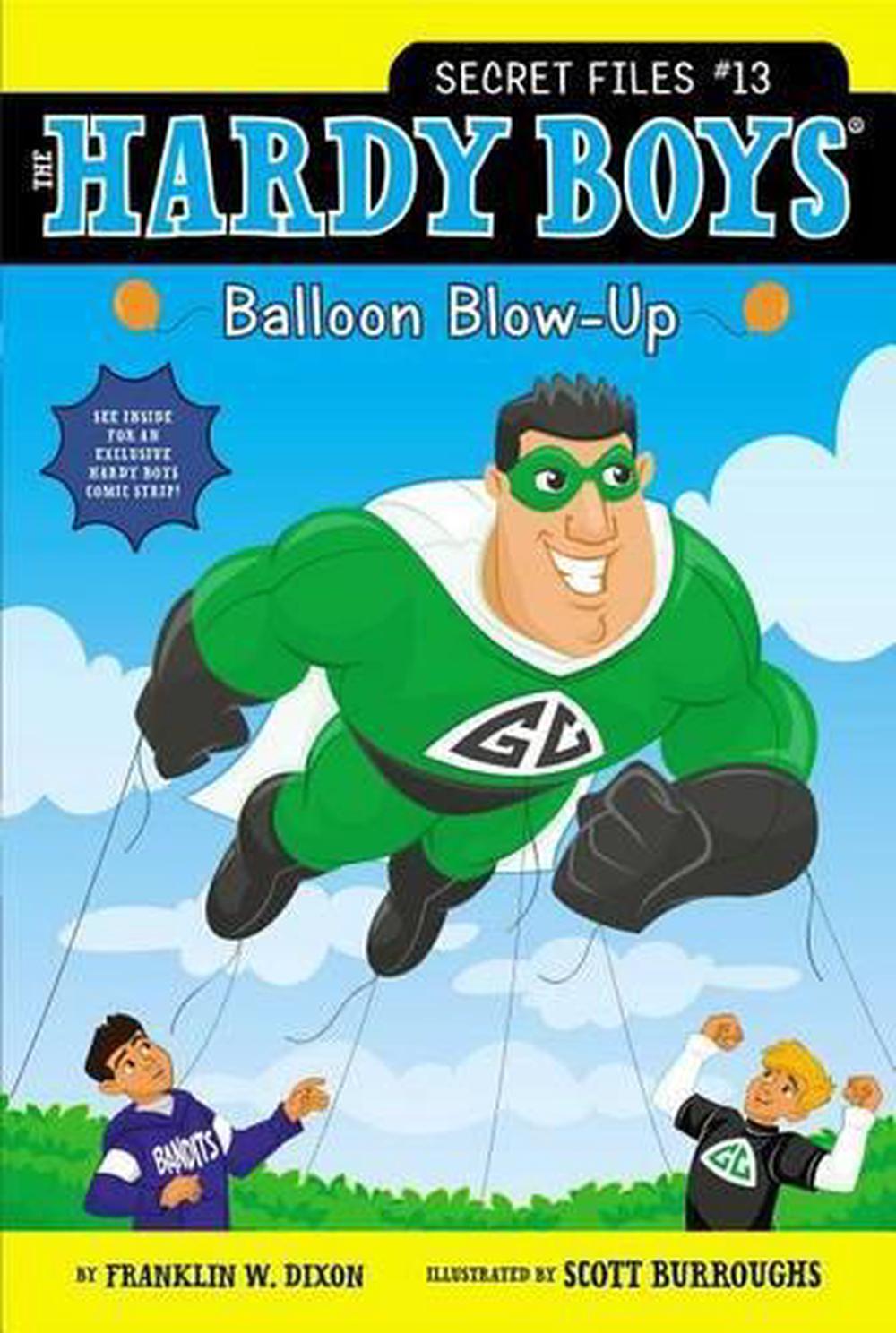 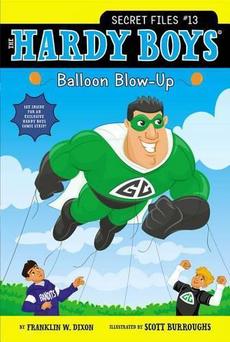 Frank and Joe are on a case that really pops in this Hardy Brothers Secret Files Mystery.

The Green Crawler is one of the coolest superheroes around, and Frank and Joe are some of his biggest fans. And thanks to a contest, the Hardy boys get to be two of the handlers for the new Green Crawler balloon in the annual Fall Festival parade in Bayport!

But the day before the parade, disaster strikes: someone has ripped the Green Crawler balloon! The people in charge think Joe did it-and the Hardys need to clear his name fast. Was it Bayport bully Adam Ackerman, who was green with envy that the Hardys won the contest? Or could the culprits be loyal fans of Nutty the Squirrel, the cartoon character whom the Green Crawler replaced? And Mo Mantis, the Green Crawler's archenemy, has a few tricks of his own...

Can the brothers figure out who tried to ground the Green Crawler? Or will Joe and Frank be watching the parade from the sidelines this year?

Balloon Blow-Up 1 Mall Madness Check it out, you guys!" nine-year-old Frank Hardy said. "Soon we''re going to meet the Crawler in the flesh!" "Green flesh!" Frank''s eight-year-old brother, Joe, said with a grin. It was Saturday morning. Frank and Joe were at the Bayport Mall. The boys'' friends Chet and Iola Morton were also there, along with about a hundred other kids. They weren''t at the mall to see the new electronic games or sneaker styles. They were there to meet the most awesome superhero, the Green Crawler! "Do you think the Crawler will do what he does in the movies?" Chet asked, digging into a bag of Cheesy Curls. "You mean grow extra legs five times the normal size?" Iola asked. "And climb walls and ceilings faster than a spider?" "Sure," Frank said. "As long as Mo Mantis doesn''t try to stop him." Chet let out a "Boo!" Mo Mantis was the Green Crawler''s biggest enemy. Mo was part human, part praying mantis, and his dream was to destroy the Green Crawler. Thanks to the Crawler, it was a dream that never came true. "Remember," Iola said. "We''re not here just to see the Crawler. We''re here to find out who won the contest!" "How could we forget?" Joe said. "We all drew a picture of the Green Crawler. And the kid with the best picture wins the big prize," he went on. "A chance to march with the Green Crawler balloon in the Fall Fest parade." The Fall Fest parade happened every October in Bayport. It had floats and the high school marching band, plus one supersize balloon. "I''ve always wanted to be one of those balloon handlers," Chet said, and sighed. He crossed his cheesy fingers. "I hope I win." "Me too," Joe said. He pulled something from his back pocket. It looked like a green claw on a stick. "That''s why I brought this." "What is it?" Iola asked, wrinkling her nose. "It''s my Green Crawler snapping claw!" Joe said, squeezing the handle to make it open and close. "The Green Crawler is the only one who can use Mo Mantis''s own claw against him. It''s also my lucky charm!" "You don''t need luck to win this contest, Joe," Frank said. "Just the best drawing of the Green Crawler." Joe pictured himself as a balloon handler. Neat! But then he had a scary thought . . . "What if the balloon picks me up and carries me away?" Joe asked. "I''m just a kid!" "The other handlers will all be grown-ups," Frank said with a chuckle. "That''s what it said in the rules." "Hopefully, big and strong grown-ups," Chet said. "I heard the Green Crawler balloon is humongous!" They were about to move closer to the stage when a bunch of voices began shouting: "We want Nutty! We want Nutty back in the parade!" "Who are they?" Chet asked as some kids marched by holding signs. "And why are they wearing squirrel hats?" "It''s the Nutty the Squirrel fan club," Frank explained. "You mean that cartoon squirrel?" Iola asked. "The Nutty the Squirrel balloon was in the parade two years in a row." "That''s why the fan club is here, I guess," Frank decided. "They want the Nutty balloon back in the parade." "They can dream on," Chet declared. "The Green Crawler wipes the floor with that Nutty the Squirrel!" "Shh!" Iola warned. "They might hear you!" Too late. The fans stopped shouting. A boy wearing glasses and the biggest squirrel hat glared at Chet as he walked over. "Here comes Sammy Kernkraut," Joe murmured. "He''s the president of the Nutty club." "How do you know?" Frank asked. "He''s in my class," Joe said. "He carries a Nutty lunchbox and wears a different Nutty T-shirt every day." Sammy stopped in front of Chet. He planted his hands on his hips, then said, "Oh yeah? Nutty the Squirrel can stuff a hundred acorns into his mouth--and whistle the Nutty theme song at the same time." "Oh yeah?" Chet shot back. "The Green Crawler can climb a skyscraper in thirty seconds!" "Nutty can do it in ten seconds!" Sammy snapped. As Chet and Sammy continued to argue, Joe turned to Frank. "Too bad there can''t be two balloons in the parade," he whispered. "Oof!" Frank grunted as someone bumped past him. He frowned when he saw Adam Ackerman--the biggest bully at Bayport Elementary School. With him was his friend, the second-biggest bully, Tony Riccio. Adam and Tony pushed their way through the crowd toward the stage, stepping on several toes along the way. "Why don''t you look where you''re going?" Frank yelled. "Why don''t you mind your own business," Adam shot back, "detectives Hardy and Hardy?" Frank rolled his eyes. Adam was always teasing him and Joe about solving mysteries. Probably because he was always the suspect. "What if Adam wins and gets to be a balloon handler?" Frank asked, and frowned. "Adam?" Joe snorted. "He''s got enough hot air to be his own balloon!" Sammy walked by, holding Chet''s bag of Cheesy Curls. Chet was holding a small bag of Nutty Squirrel Nuts. "What happened?" Frank asked. "We made a truce," Chet said, popping a nut into his mouth. "But Sammy still wants Nutty in the parade." A tune suddenly blared from the loudspeaker. It was the Green Crawler theme song. "We want the Green Crawler!" Joe yelled. Soon all the kids, except those in the Nutty the Squirrel fan club, were cheering for the Crawler too! The cheering grew louder as a trapdoor in the stage floor slowly opened. "Here he comes!" Joe shouted. A thick gray mist covered the stage. Through it the outline of a figure could be seen. "It''s him!" Chet said. "It''s the Crawler!" Joe looked harder, then shook his head. "That''s not the Green Crawler," Joe said. "That''s the villain--Mo Mantis!"