The Internet is Not the Answer

PUBLISHED: 28th January 2015
ISBN: 9781782393405
ANNOTATION:
In this controversial new book, Andrew Keen argues that the Internet has had a disastrous impact on all our lives - and outlines what we must do to change it, before it's too late. 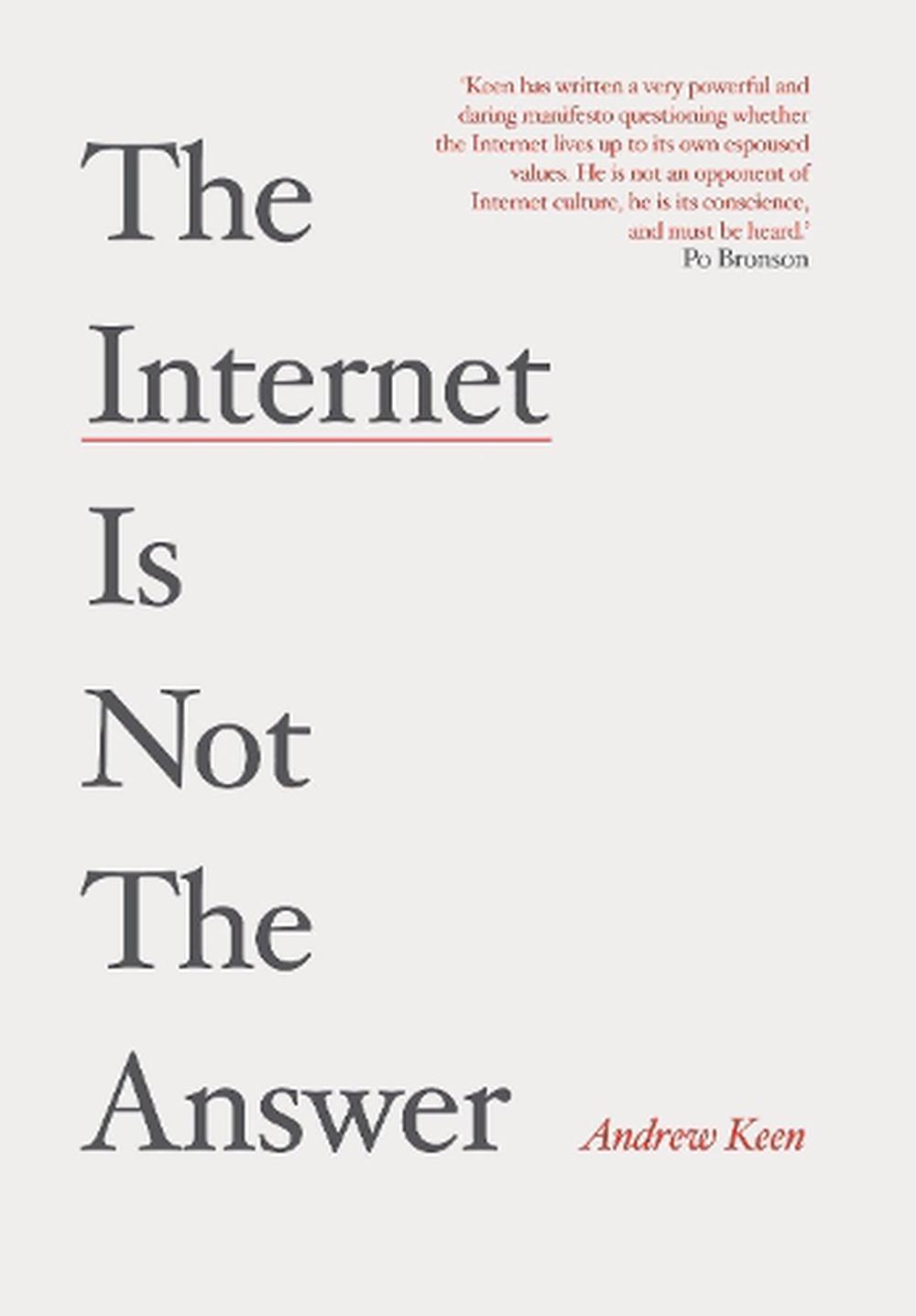 In this controversial new book, Andrew Keen argues that the Internet has had a disastrous impact on all our lives - and outlines what we must do to change it, before it's too late.

The worldwide web is now a quarter of a century old. Invented in 1989, there can be no doubt that the web, and the new businesses it has enabled, has transformed the world. But, according to Andrew Keen, this disruption has been a terrible failure. In The Internet is not the Answer, Keen has written a sharp, witty polemic proving that, so far, the web has been mostly a disaster for everyone except a tiny group of young privileged white male Silicon Valley multi-millionaires.

Rather than making us wealthier, the unregulated digital market is making us all poorer. Rather than generating jobs, it is causing unemployment. Rather than holding our rulers to account, it is creating a brightly lit, radically transparent prison in which everything we do is recorded. Rather than promoting democracy, it is empowering mob rule. And rather than fostering a new renaissance, it is encouraging a culture of distraction, vulgarity and narcissism.

So what is to be done? The next twenty-five years are key, Keen explains, because, by 2040, everyone alive will be online. In The Internet is not the Answer, he disrupts the disrupters by laying out a five-part solution to the crisis. He says we need to rethink the web, revive government authority, rebuild the value of content, resurrect privacy and, above all, reconceive humanity. The stakes couldn't be higher, he warns. If we do nothing at all, this new technology and the companies that control it will continue to impoverish us all.

Andrew Keen is the executive director of the Silicon Valley salon FutureCast, a columnist for CNN and a regular commentator on all things digital. He is the author of Digital Vertigo and the international sensation and The Cult of the Amateur, which has been published in seventeen languages.

Andrew Keen is the Christopher Hitchens of the Internet. Neglect this book with peril. In an industry and world full of prosaic pabulum about the supposedly digitally divine, Keen's work is an important and sharp razor. Michael Fertik, CEO, Reputation.com If you've ever wondered why the New Economy looks suspiciously like the Old Economy - only with even more for the winners and less for everyone else - put down your shiny new phablet and read this book. Robert Levine, author of Free Ride A provocative title and an even more provocative book. Andrew Keen rightly challenges us to think about how the internet will shape society. I remain more optimistic, but hope I'm right to be so. Mark Read, CEO, WPP Digital Keen provokes us in every sense of the word-at times maddening, more often thought-provoking, he lets just enough out of the Silicon Valley hot air balloon to start a real conversation about the full impact of digital technology. Larry Downes, co-author of Unleashing the Killer App Andrew Keen has again shown himself one of the sharpest critics of Silicon Valley hype, greed, egotism, and inequity. His tales are revealing, his analyses biting. Mark Bauerlain, author of The Dumbest Generation Andrew Keen has written a very powerful and daring manifesto questioning whether the Internet lives up to its own espoused values. He is not an opponent of Internet culture, he is its conscience, and must be heard. Po Bronson A packed compendium of all the ways digital life casts aside basic human virtues in favor of a rapacious, winner-takes-all economy. Out of Silicon Valley's libertarian ethos came the myths that information "wants to be free" and that the Internet is fueling a cooperative new utopianism. Keen is excellent at exposing the hypocrisy of that mythology. -- Michael Harris Washington Post Extremely well-researched and well-written -- William Hartston Daily Express A punchy manifesto about the future and integrity of the internet age... This book is a must-read for for anyone remotely concerned about their lives on the net. Independent Keen has a sharp eye when it comes to skewering the pretensions and self-delusions of the new digital establishment Financial Times Andrew Keen's pleasingly incisive study argues that, far from being a democratising force in society, the internet has only amplified global inequities. -- John Naughton Observer Pacey and chilling... A powerful, frightening read -- Bryan Appleyard Sunday Times