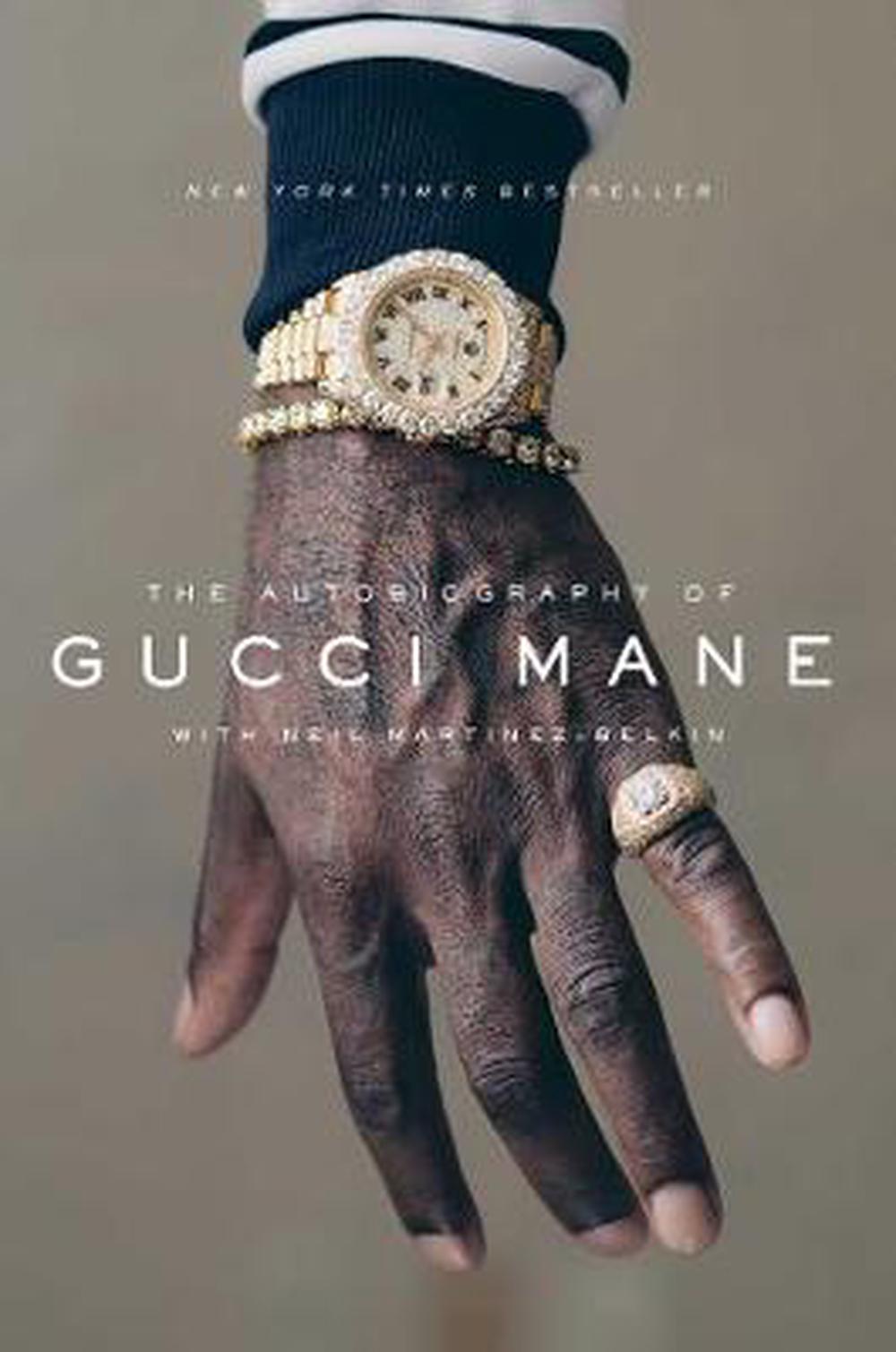 "As wild, unpredictable, and fascinating as the man himself. " -Complex "A cautionary tale that ends in triumph." -GQ "A revelation and a welcome addition to hip-hop's literary legacy." -All Hip Hop

The highly anticipated memoir from Gucci Mane, "one of hip-hop's most prolific and admired artists" (The New York Times).

For the first time Gucci Mane tells his story in his own words. It is the captivating life of an artist who forged an unlikely path to stardom and personal rebirth. Gucci Mane began writing his memoir in a maximum-security federal prison. Released in 2016, he emerged radically transformed. He was sober, smiling, focused, and positive-a far cry from the Gucci Mane of years past.

Born in rural Bessemer, Alabama, Radric Delantic Davis became Gucci Mane in East Atlanta, where the rap scene is as vibrant as the dope game. His name was made as a drug dealer first, rapper second. His influential mixtapes and street anthems pioneered the sound of trap music. He inspired and mentored a new generation of artists and producers: Migos, Young Thug, Nicki Minaj, Zaytoven, Mike Will Made-It, Metro Boomin.

Yet every success was followed by setback. Too often, his erratic behavior threatened to end it all. Incarceration, violence, rap beefs, drug addiction. But Gucci Mane has changed, and he's decided to tell his story.

In his extraordinary autobiography, the legend takes us to his roots in Alabama, the streets of East Atlanta, the trap house, and the studio where he found his voice as a peerless rapper. He reflects on his inimitable career and in the process confronts his dark past-years behind bars, the murder charge, drug addiction, career highs and lows-the making of a trap god. It is one of the greatest comeback stories in the history of music.

The Autobiography of Gucci Mane is a blunt and candid account-an instant classic.

Gucci Mane, born Radric Delantic Davis, is a critically acclaimed, platinum-selling recording artist. He has released nine studio albums and dozens of mixtapes. He lives in Atlanta, Georgia, with his wife Keyshia Ka'oir. The Autobiography of Gucci Mane is his first book.

Neil Martinez-Belkin is the former music editor at XXL Magazine and has written extensively about contemporary hip-hop with a regional focus on Atlanta. He lives in Boston.

"The Autobiography of Gucci Mane is written with an appealing matter-of-factness, and it helps to replace myth with something closer to the real story." -THE NEW YORKER "The Autobiography of Gucci Mane is Gucci's greatest redemption song . . . His autobiography shines because we get to see an emotionally intelligent Gucci. We see his fears and his doubts. . . . Given Gucci's influence on this generation and its rappers, as well as neighborhood pushers from inner-city dwellings around the country, his newly debuted book is poised to inspire rappers and men like myself to give more thought to mental health, drug use and the kind of lives we want to lead." -VIBE "His book brings a fuller worldview to the rhymed version of the biography he's previously shared." -PACIFIC STANDARD "Better than any urban novella, the book is an exemplary account of the life and times of Radric Davis from Bessemer, Alabama-otherwise known as Gucci Mane." -NEWSWEEK "The Autobiography of Gucci Mane is about growth, resilience and how no matter the setback, Gucci Mane is always prepared to come back harder than ever before. . . . the many lessons Gucci Mane endured and shared in this autobiography can be valued by us all." -ESSENCE "As entertaining as anything Gucci has ever made . . . The entire book feels less like an autobiography but rather a conversation . . . something moving and meaningful, much more so than the usual 'hustler to rapper' story." -SWGRUS "Autobiography buzzes with the grandeur and grittiness that Gucci is known for, and some of that can be attributed to the music journalist Neil Martinez-Belkin, who co-wrote it." -THE OUTLINE "Gucci's family life, drug dealing and arrests - as well as the perfection of a musical style that would help elevate the careers of a slew of young Southern artists such as Migos, Young Thug and Zaytoven - are on full display in the new The Autobiography of Gucci Mane . . . the trap king's roots, and his past, remain close to his head and his heart." -THE UNDEFEATED "Gucci Mane managed to turn his entire life around and penned that ascent in his newest memoir . . . a well-rounded portrait." -REVOLT TV "Unflinching . . . refreshingly blunt . . . riveting, filled with music-world intrigue and inner-city shootouts and buoyed by a self-awareness not marred by ego." -PUBLISHERS WEEKLY "A necessary reintroduction to the Atlanta trap god . . . His innumerable false starts are articulated with a stark honesty rare in most autobiographies." -ARTS ATL "Honest, revealing . . . blunt, outrageous." -UPROXXX "The Autobiography of Gucci Mane, written with music journalist Neil Martinez-Belkin, quietly defies the conventions of the celebrity memoir genre; in parts, it reads like what I can only describe as pop culture poetry. . . . In its conversational candor and the razor-sharp image it evokes of a particular era, it felt reminiscent of Patti Smith's Just Kids." -LITERARY HUB "Inspirational." -THE SOURCE "Highly-anticipated . . . a serious look inside his major life struggles and triumphs." -BILLBOARD "Gucci Mane's story is one of reinvention." -PEOPLE.COM "Few careers have been as tumultuous as that of Radric Delantic Davis. Through sheer grit, shrewd intelligence, and a stubborn unwillingness to be counted out, he transformed himself from a street hustler, drug dealer, and occasional strong-armed robber into a modern day Zone 6 prophet. Even while incarcerated, Gucci remained a cult hero to a generation that reached far beyond the Southern city where his influence first blossomed. His is a story of overcoming adversity, taming internal demons and rejecting the imposed labels of others." -HIGHSNOBIETY "Reads like a drugged out crime thriller on A&E. . . . A thorough look into the experiences that molded one of rap's most polarizing figures in recent memory." -VICE "A story of black manhood in the American South as never described before. . . . an eye-opening look into the life of the Trap God and the sound he influenced. . . . a revelation and a welcome addition to hip-hop's literary legacy." -ALL HIP HOP "A captivating dive into the mind of Radric Davis. . . . The book provides incredible insight into one of the most influential rappers of the last decade, detailing a volatile and fascinating life . . . By the end, every reader will have a greater understanding of Gucci Mane, the man and the musician." -PITCHFORK "A cautionary tale that ends in triumph. . . . There are scenes from Gucci Mane's new autobiography that seem better fit for a gripping Oscar drama than for the story of a guy who recently won his first MTV Video Music Award." -GQ "As wild, unpredictable, and fascinating as the man himself." -COMPLEX