by Aaron Franklin and Jordan MacKay 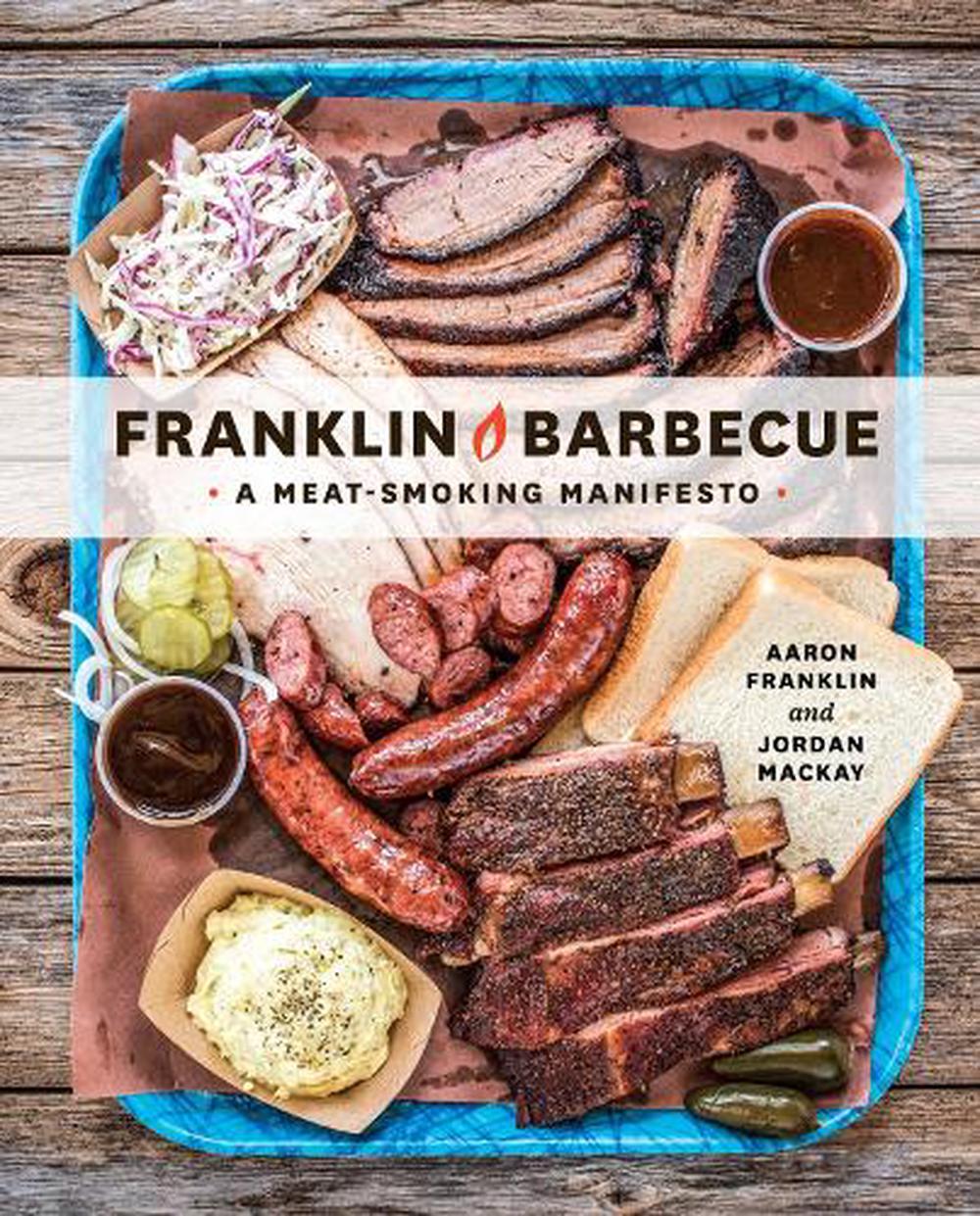 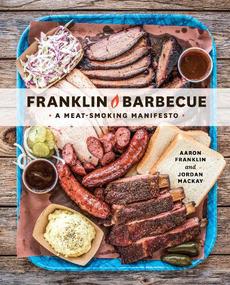 In this hotly-anticipated debut, Aaron Franklin shares the secrets behind his award-winning (and obsessed-over) barbecue. More than just a recipe book, Franklin Barbecue is a master course in the fine art of meat smoking, Texas-style. With tips on how to source the very best beef; build or hack your backyard smoker; find and cure the right wood; and yes, step-by-step instructions for making Franklin's legendary brisket, ribs, and all the fixins, Franklin Barbecue will be even more talked-about and acclaimed than Franklin's menu items.

AARON FRANKLIN is one of the biggest, most recognized names in barbecue and the wider food world. His restaurant has won every major barbecue award and has been in magazines ranging from GQ to Bon Appetit. The line to get into Franklin Barbecue is as long as ever, and the restaurant has sold out of brisket every day of its existence. Franklin makes regular TV appearances on BBQ Pitmasters, and will star in his own PBS program, BBQ with Franklin, in spring 2015.

"Aaron Franklin makes the finest barbecue I've ever had, barbecue worth waiting for. His work and his words express a truly rare level of commitment and expertise. With Franklin Barbecue, he shares it all--in a book that, fortunately, you don't have to wait for."-- Anthony Bourdain
"I used to think Aaron Franklin was a genius: There was his rise from backyard dabbler to king of Texas pitmasters; his mind-altering brisket that made normally rational people (myself included) wait hours for the chance to eat it; and his insistence that game-changing barbecue doesn't come from miracles but rather elbow grease. Then he wrote this book and gave all his secrets away. Now everyone--from me to you to your neighbor who can't grill a chicken breast--will be able to make award-winning barbecue. He's not a genius anymore; he's a god." -- Andrew Knowlton, restaurant and drinks editor, Bon Appetit "The most refreshing barbecue book to come along yet. Rather than preaching about 'one true way, ' Aaron Franklin guides you through all the wood and smoke so that you can find your own style. And instead of just listing ingredients and rattling off generic recipes, these pages tell the story of a place and a barbecue tradition steeped in history. This isn't just a book about barbecue; this book is Central Texas barbecue." -- Daniel Vaughn, barbecue editor, Texas Monthly, and author of The Prophets of Smoked Meat "Pure genius! Aaron Franklin has distilled years' worth of barbecue knowledge into this book. In it, he exposes the sacred insights of a top pitmaster--information that can otherwise only be learned from long nights spent staring at a fire, shovel in hand, constantly prodding and pinching your meat to figure out that 'just perfect' point of doneness. This book is a game changer: read it, and your barbecue will improve overnight!" -- Adam Perry Lang, chef, restaurateur, and author of Serious Barbecue "A complete meat-and brisket-cooking education from the country's most celebrated pitmaster. More than just a recipe book, this is a master course in the fine art of meat smoking, Texas-style."-- Library Journal New York Times Best Seller

The notion of putting everything I know about barbecue into a book is a daunting one. Not because I know so much--I''m still learning--but because of the nature of barbecue itself. It''s because the printed word--definitive, exacting, permanent--is in many ways antithetical to the process of cooking barbecue, which is, for lack of a better word, loosey-goosey. So many people want to have a recipe, but with all of the variables in barbecue--wood, quality of fire, meat selection, type of cooker, weather, and so on--there is no "magic" recipe. It just doesn''t operate with absolutes of temperature, time, and measurement. In fact, there are no rights or wrongs in barbecue (well, that may be a stretch), no "just one way," and certainly no simple "black and white." You''re much better off with general knowledge of what you want and an arsenal of tricks to have up your sleeve. So unlike most books that you may flip through a few times and then place on the shelf to display with the others, I hope this one will live a good portion of its life out in the field, be it in the kitchen or out by the smoker. These recipes aren''t really recipes but more of an idea of how I go about cooking barbecue and some guidelines. Now, this book is not a survey of barbecue traditions across the country. While I''ve been all over the United States and have eaten lots of great barbecue, there''s really only one tradition that I know intimately: my own. My style is steeped in the tradition of Central Texas, but it''s also got some wrinkles that I discovered along the way. So, with the greatest respect to all of the other styles around the country, in this book, all I discuss is what we do. Yes, I am wedded to the tradition of great Central Texas barbecue and the principles it holds--brisket, oak, open flame--but I''m also always willing to try something new or look into new designs that might make things cook faster and better. And my hope is that by being hyperdetailed and specific about my techniques, I will help you in your cooking and in your ability to develop your own style too. At Franklin Barbecue, the only thing we''ve got is the dedication to make the best food we can and to keep it consistently the same every day (which itself is the biggest challenge). It''s that dedication that keeps us evolving as cooks and constantly thinking about new ways to do old things. You''ll notice that there''s a serious thread of do-it-yourself running through this book. That''s because one of the words with which I''ve been known to describe myself is cheap . For large stretches of my life, I didn''t have the cash to buy things I wanted, so I often just figured out how to make them myself. In the process, I sometimes discovered how to make them better or at least how to tailor them to my own needs. However, while I participate in DIY culture and continue to build stuff all of the time, it''s by no means necessary to take this approach in order to benefit from this book. I say, use whatever equipment you''ve got on hand; ideally, the information I present here will help you make the best of it. Most barbecue books I''ve looked at are organized around the major food groups: beef, pork, poultry, and so on. (At least, those are my food groups.) In this book, which isn''t heavily focused on recipes, I''ve taken a different approach. It''s a more elemental and theoretical breakdown of the barbecue process. In each chapter, I drill down into some fairly technical information with regard to how the process of barbecue works. It can get a little geeky, but I hope that in a way the geekiness keeps you engaged. I include this information because I myself love the technical details. Understanding how something works is the first step toward successfully replicating and improving it. The first chapter is an extended telling of my own story. I include it at this length not for the purpose of vanity, but the opposite--so that everyone can see how you don''t have to have much money, history, training, or even time to become proficient at barbecue. I really just want to show how a love for barbecue coupled with enthusiasm can equal really good-tasting smoked meat. If I can do this, you can too. The second chapter is all about the smoker. In Texas, this piece of equipment might be called a smoker, cooker, and pit all in the same sentence, but whatever you call it, barbecue practitioners have no end of fascination with these clunky steel constructions. Everyone who designs and builds his or her own smoker does something a little bit different, always looking for that tweak that will improve its performance. In this chapter, I talk about various kinds of smokers and various modifications you can make to improve the performance of an inexpensive off-the-rack smoker you might buy at an outdoors store. I also give a very basic template for how to build your own smoker from scratch. It''s by no means a blueprint but rather intended to give you an idea of what to think about if you undertake such a project. While smoker construction sounds--and is--fairly ambitious, I can tell you that I''ve built very heavy smokers in my backyard with a cheap welder, rope, and a tree branch to hoist pieces up. Chapter three is about wood. Wood is our sole fuel, but it''s also arguably the most important seasoning in the food. Without wood, barbecue wouldn''t be barbecue, so we have to take the wood we use as seriously as we would any ingredient in any dish. Just as you wouldn''t saut

By Danii
Awesome read. Full of info that any bbq enthusiast would find helpful.
By Karl

Own it now, pay later.

The smarter way to pay for what you want today.

Want it
Create your account in moments and select Zip at checkout
Get it
We pay the store, you get the goods, nothing to pay today
Own it
Choose how you pay us back over time, up to 6 months interest free
Learn more
To see Zip's complete terms, visit https://zip.co/terms-and-conditions
Loading your Wishlists...